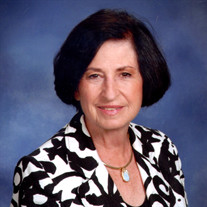 Mrs. Betty Waite Denio, age 79 of Covington, died Tuesday, July 31, 2018. She was born May 26, 1939. She attended Clarke County High School and Huntingdon College. As a young wife and mother, she moved to the Atlanta area and began a long,... View Obituary & Service Information

The family of Betty Waite Denio created this Life Tributes page to make it easy to share your memories.

Send flowers to the Denio family.