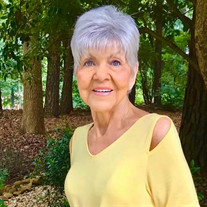 Mrs. Betty 'Joyce' Garren, age 82 of Stockbridge, died Saturday, December 26, 2020. She was preceded in death by her parents, Maynard and Edith Killian and brother, Ben Killian. She is survived by her husband of 50 years, Jerry Garren; daughters... View Obituary & Service Information

The family of Betty Joyce Garren created this Life Tributes page to make it easy to share your memories.

Send flowers to the Garren family.