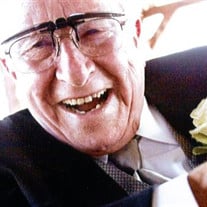 Mr. Bill Vernon Spivey, age 87 of Conyers, died Thursday, January 25, 2018. He was preceded in death by his parents, Talmage and Carrie Belle Spivey and brother, Luther Spivey. He is survived by his wife of 65 years, Betty Cheek Spivey; sons and daughter-in-law, David and Tracie Spivey, Edwin 'Tag' Spivey; daughters and sons-in-law, Susan and Archer Pippin, Bonnie and Ron Hadden; brother, Benjamin Grice Spivey; numerous nieces and nephews. He was blessed by eleven grandchildren and seven great-grandchildren who loved their BumBum. A graduate of the Southern College of Pharmacy, he also served in the U.S. Navy from 1951-55 before moving to Conyers in 1959 to work for Beasley Drug Company and purchasing the business in 1972. In addition, Mr. Spivey was active in the Jaycees, Rotary Club, Masonic Lodge and served on the boards of the Rockdale Hospital Authority, GA Intl Horsepark, Rockdale Housing Authority and the Rockdale Houses. While serving as an elected member of the Conyers City Council for almost two decades, he, along with Mayor Charles Walker, started and helped lead, since the inception, the 'World's fastest growing' St. Patrick's Day parade along with councilman and friend Bill Rogers. Mr. Spivey's legacy of service is also forever engraved in the community by a community park dedicated to him in 2008 by the Conyers/Rockdale Housing Authority, where he served on the board of directors for 35 years. A Memorial Service will be held on Sunday, February 4 at Conyers First United Methodist Church with Dr. Dave Benson and Dr. Alice Rogers officiating. Family will receive friends on Saturday, February 3 from 4 until 6 p.m. at Scot Ward's Funeral Services. In lieu of flowers, contributions may be made to the Rockdale Houses (rockdalehouses.org). Condolences may be submitted on-line at www.scotward.com. Scot Ward Funeral Services, 699 American Legion Rd., Conyers, GA, 770-483-7216.

Mr. Bill Vernon Spivey, age 87 of Conyers, died Thursday, January 25, 2018. He was preceded in death by his parents, Talmage and Carrie Belle Spivey and brother, Luther Spivey. He is survived by his wife of 65 years, Betty Cheek Spivey; sons... View Obituary & Service Information

The family of Bill Vernon Spivey created this Life Tributes page to make it easy to share your memories.

Send flowers to the Spivey family.