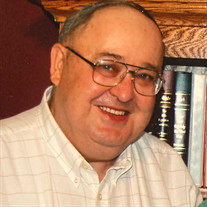 Billy Harold Davis, age 84 of Conyers, passed away Thursday, June 18, 2020 after an extended illness. He was preceded in death by his wife, Peggy Thomas Davis; mother, Nannie Davis; father, Sam Davis; and brothers, Wayne and Travis Davis. He is survived by his sons, Stan Davis and wife, Jennie of Loganville and Britt Davis and wife, Terri of Mansfield. Billy had four grandchildren, Brittoni Garner and husband, Bailey of Buford, Jessi O'Toole and husband, Matt of Grayson, Cale Davis and wife, Alexa of Macon, and Luke Davis of Loganville. He had three great-grandchildren, Grant, Wyatt, and Barrett. Billy was a life-long member of Philadelphia United Methodist Church where he taught Sunday School for many years and served in various leadership positions. He was retired from Bethlehem Steel Corporation and later operated the Covington branch of ABC Awards. He will be remembered as a caring, soft spoken, loving husband and father who always sought the good in people. Billy was a voracious reader who studied US and World History and loved college football. Graveside services will be held Tuesday, June 23, 2020 at 1 p.m. at Philadelphia UMC Cemetery with Pastor Mike Hardy officiating; family will receive friends from 10 a.m. until 12 p.m. prior to the service at the funeral home. In lieu of flowers, please consider contributions to Philadelphia Methodist Church, 2194 W. Hightower Trail, Conyers, GA 30012, in memory of Billy Davis. Condolences may be submitted on-line at www.scotward.com. Scot Ward Funeral Services, 699 American Legion Rd., Conyers, GA, 770-483-7216.

The family of Billy Harold Davis created this Life Tributes page to make it easy to share your memories.

Send flowers to the Davis family.