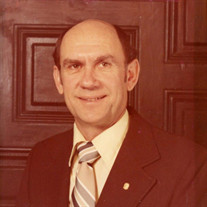 Billy Ray Wiley, Sr., age 89 of Conyers, died Wednesday, June 30, 2021. He was born to the late Nezzie Prickett and James William Wiley on February 24, 1932. He was the eighth of nine children. Billy was preceded in death by his siblings, James Walter, Mary Elizabeth Savage, Herbert L., Frances Lewis, Gladys Mae Dunn, Dorothy Grace Jonas, Jean Oglesby, son-in-law, Anthony Smith, and his second wife of 60 years, Shirley Ann Phelps Wiley. He is survived by Billy Ray, Jr. 'Bill' and Marty Wiley, Deborah Ann Smith, David P. and Janet Wiley, Crystal and Jimmy Brockman. He has eight grandchildren, 14 great-grandchildren, and his first great-great-grandchild is due in August. Billy attended Starsville Grammar School, Mansfield Elementary and Covington High School and was a member of the first graduating class of Newton County in 1950. He was in the National Guard for 15 years attaining rank of Sgt 1st class. For 37 years he was employed with Southern Bell in Newton and Rockdale Counties and worked as a volunteer Firefighter for 15 of those years. He was elected VP and President of Athens CWA Local 3203, the CWA Local 3205 as President for 18 years. He served and was elected for several positions in the Rockdale Jaycees including President and VP and was awarded Distinguished Service Award and also Colonel in the Jaycees Rebel Corp. Billy was grateful to have a job he enjoyed in Newton and Rockdale Counties and was blessed to have met and worked with so many wonderful people. Funeral services will be held Saturday, July 3, 2021 at 2 p.m. at Scot Ward's Green Meadow Chapel; interment will follow at Sardis Church Cemetery, Oxford. The family will receive friends from 12 until 2 p.m. prior to the service at the funeral home. In lieu of flowers, contributions may be made to Conyers First United Methodist Church, 921 N. Main Street, Conyers, GA 30012. Condolences may be submitted on-line at www.scotward.com. Scot Ward Funeral Services, 699 American Legion Rd., Conyers, GA, 770-483-7216.

Billy Ray Wiley, Sr., age 89 of Conyers, died Wednesday, June 30, 2021. He was born to the late Nezzie Prickett and James William Wiley on February 24, 1932. He was the eighth of nine children. Billy was preceded in death by his siblings,... View Obituary & Service Information

The family of Billy Wiley created this Life Tributes page to make it easy to share your memories.

Send flowers to the Wiley family.