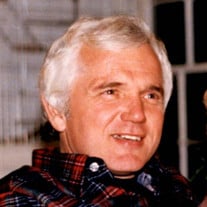 James H. Austin, known to everyone as ‘Buddy’, departed this life on Sunday, August 25, 2019. He is survived by his father, John Austin; wife, Sandi; son, Leonard and daughter-in-law, Sheila Austin; daughter Dr. Jennifer Austin and son-in-law Dr. Ioannis Angelakis; granddaughters Crystal (and Bret) Benton, Mandi Austin; great granddaughters, Bailey and Braelyn Benton; many cousins and dear friends. Buddy was born in Anniston, Alabama, but spent most of his youth in New Bedford, Massachusetts, where he made life-long friendships. It was there he developed a love of ice hockey. When he moved to Atlanta, he played semi-pro hockey with Atlanta’s first hockey team, the Atlanta Knights. Residential construction was his calling as a young adult. He started in trim work and later founded San Bud Builders, where he built homes throughout the greater Atlanta area for over 40 years. Buddy created lasting friendships with many of his homeowners due to his work ethic, honesty, and kindness. He was a master craftsman and continued remodeling homes into the last months of his life. In addition to his skills as a builder, Buddy was an avid Harley Davidson rider, an accomplished horseman, and a master collector of memorabilia from the 40’s and 50’s. He made friends wherever he went and was always available to lend a hand to family and friends. He will be sorely missed by everyone who knew him. Buddy's Funeral Service will be held Tuesday, August 27, 2019 at 1:00 p.m. at Scot Ward's Green Meadow Chapel in Conyers, immediately followed by a gathering of family and friends. He will be buried beside his mother, Gladys Austin, in Anniston, Alabama. A Graveside Service will be held at Forestlawn Gardens at 11:00 a.m. (CST) on Wednesday, August 28, 2019. Condolences may be submitted on-line at www.scotward.com. Scot Ward Funeral Services, 699 American Legion Rd., Conyers, GA, 770-483-7216.

The family of Buddy Austin created this Life Tributes page to make it easy to share your memories.

James H. Austin, known to everyone as ‘Buddy’, departed this...

Send flowers to the Austin family.