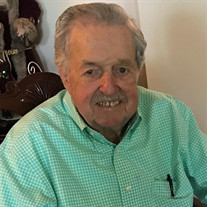 C.L. Cook, 85, died unexpectedly on Thursday, December 12th. The world lost a great man, as C.L. was of the generation who proved a combination of hard work and strong ethics could take a person far in this life. C.L. was born on April 17, 1934 on Wesley Chapel Road in South DeKalb County. Even before he graduated from Southwest DeKalb High School in 1952, he was hard at work as a brick mason. It wasn't long before he was making a mark in the world, and in 1953, he was named Apprentice of the Year and represented the state of Georgia. From 1953 to 1961, he worked as a foreman and mason and in 1961, formed C.L. Cook, Inc. and served on the board of MCAA. In 1976, he formed Pyramid Masonry Contractors, Inc. The company, under his leadership, continued to grow and by 1987 he had opened satellite offices in Charlotte and Orlando. Today, Pyramid continues to thrive and remains one of the top masonry contractors in the southeastern United States. C.L. and his wife, Joyce, moved from Wesley Chapel Road to Social Circle in 1991, where C.L. developed one of the premier Black Angus herds in the country. He promoted the same quality and integrity in his cattle business that he had in his masonry business, and was elected President of the Georgia Angus Association. He was selected as Cattleman of the Year, Outstanding Conservationist for Newton County, and Outstanding Conservationist for Georgia. All these accolades were given to a man who started laying brick as a teenager. C.L. was never boastful, but he set an example for all who ever had the good fortune of knowing him. C.L. was preceded in death by his parents, Tom R. and Bertha Cook and five siblings: Lucy Cook Breedlove, Enid Cook Payne, Mary Cook Freeman, Dewey Cook, and Betty Cook Skelton. He is survived by his wife of 66 years, Joyce Manning Cook; his sister, Elizabeth Cook Lewis and her husband, Bill; his three children, Karen Cook Swords and her husband, Steve, Kenneth Cook and his wife, Jeanne, and Angel Cook Edwards and her husband, Steve; eight grandchildren; four great grandchildren, and a number of beloved nieces and nephews. Funeral Services will be held Monday, December 16, 2019 at 1:00 p.m. at Scot Ward's Green Meadow Chapel; interment will follow at Resthaven Memorial Gardens. Family will receive friends Sunday, December 15, 2019 from 5 until 8 p.m. and from 11 a.m. until 1 p.m. prior to the service at the funeral home. In lieu of flowers, please make donations to Camp Twin Lakes, 1391 Keencheefooee Road, Rutledge, GA 30063 or your favorite charity. Condolences may be submitted on-line at www.scotward.com. Scot Ward Funeral Services, 699 American Legion Rd., Conyers, GA, 770-483-7216.

C.L. Cook, 85, died unexpectedly on Thursday, December 12th. The world lost a great man, as C.L. was of the generation who proved a combination of hard work and strong ethics could take a person far in this life. C.L. was born on April 17,... View Obituary & Service Information

The family of C.L. Cook created this Life Tributes page to make it easy to share your memories.

Send flowers to the Cook family.