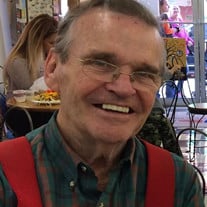 Charles 'Ray; Magnusson, a long-time resident of Conyers, father, grandfather, brother, uncle, and friend, passed peacefully into the presence of his Savior, June 2, 2021 at the age of 84. Ray a native of Alabama, met his favorite dance partner, Shirley, in New Orleans in the 1960s while he was travelling as a pharmaceutical salesman, and where she, working as a pharmacist, caught his eye from the other side of the counter. When he circled back the following week to ask her out, a Jamaica honeymoon and 54 years of marriage were set in motion. They filled their Louisiana home with two young children and countless antique finds they picked up while 'junking' together, one of their favorite past times. Ray was transferred to Atlanta in the early 70's and the family settled near the then two-lane interstate in Conyers with a Chevrolet El Camino and a pinto pony. They later bought land and spent countless weekends sourcing and collecting the reclaimed materials which became the inspiration for the family home they took their time designing and building together. And after a long while, a third child was born. Ray graduated from Samford University in Birmingham with a degree in bacteriology. After being recruited by the U.S. Army, he researched treatments for burn victims at Brooke Army Medical Center in San Antonio, Texas. Later, he became a pharmaceutical rep for Johnson and Johnson where he remained until retirement. Ray then bought Mother Hubbard's convenience store, in the Hi Roc neighborhood, where he manned the counter for many years. In their spare time, he and Shirley renovated dilapidated properties that they flipped or rented and worked on historic preservation in Olde Town Conyers. Ray was a founding member of the Rockdale County Historical Society and helped stay the demolition of some of the historical landmarks still standing in Olde Town Conyers. Because of his love for historical preservation, his wife and children say he was the champion behind the effort of the town to bring back and display the historic 'Dinky' locomotive. He also started a local chapter of Toastmasters with a friend and was a member for many years. This segued into him becoming active in local politics and serving a term as Commissioner in Rockdale County. In the later years of his life, Ray still ran into someone he knew just about everywhere he went. And the inaugural moment of nearly ever encounter was his spontaneous laughter and a big pull-you-in handshake and a warm clap on the shoulder (if he didn't have a to-go cup of coffee in that hand). He was a man who took seriously the things he needed to but then didn't act like he took himself too seriously at all, and that was the charm. He was a man who provided for his family and who loved and cherished everyone who was part of it. He was a husband who made every song or open space a reason to dance and every seat-for-one a seat-for-two. He was a dad whose eyes smiled when he listened to his children and who wasn't afraid to say, 'I love you,' and he said it often. He was a father-in-law who said, right out of that gate, 'I'm there for you no matter what,' and he reiterated that. He was a granddaddy who blew on baby bellies and kissed little toes; cheered and bravo'd each and every performance; cooed at all artwork; and said, 'Oh, that's neat! You did that?' But the most important thing about Ray was that he knew and loved the Lord. He was a giver and quietly supported many local and foreign causes unbeknownst to his family. He especially loved reminiscing of his barbershop quartet days and harmonizing to old hymns and gospel songs. Before his mind began to fade, until a long time after, it was apparent that he wasn't always just singing; it was worship. Ray had a personal relationship with Jesus and said that he believed that; as it says in God's Word, Man is saved by grace alone (not by anything that a person can do), and that each and every person is a sinner who deserves death but that God sent a sinless Jesus to die so that man would not have to. He said he knew that man has to first humble himself, repent and accept God's substitute payment in order to spend eternity in Heaven, with God. Because of this, while Ray will be deeply missed, there is comfort in knowing he is in the best place possible. His life on earth was well-lived and he has embarked on a brand-new life in eternity. Those that love and remember Ray are his wife, Shirley Magnusson, his children Erik Magnusson (Lilianna), Ingrid Meier (Jon), and Nils Magnusson (Rachel) and his four grandchildren, Ava Meier, Christian Meier, Helena Meier, and Alana Magnusson. Also, his sister-in-law, Inge Magnusson, his brother, Jerry Magnusson (Nelda), Jerry's children Susan Price, Mark Magnusson, Andrea Magnusson, and Carissa Magnusson and their families. Additionally, the Talamo family (Shirley Magnusson's family and extended family), and Resi McCarthy. The family wishes to express appreciation to everyone who has reached out to offer condolences and has honored and remembered Ray. Funeral services will be held Sunday, June 6, 2021 at 2:00 PM at Scot Ward Funeral Services with Pastor Winston Menzies officiating; Entombment will follow at Green Meadow Memorial Gardens Mausoleum. Condolences may be submitted on-line at www.scotward.com. Scot Ward Funeral Services, 699 American Legion Rd., Conyers, GA, 770-483-7216.

Charles 'Ray; Magnusson, a long-time resident of Conyers, father, grandfather, brother, uncle, and friend, passed peacefully into the presence of his Savior, June 2, 2021 at the age of 84. Ray a native of Alabama, met his favorite dance partner,... View Obituary & Service Information

The family of Charles Ray Magnusson created this Life Tributes page to make it easy to share your memories.

Send flowers to the Magnusson family.