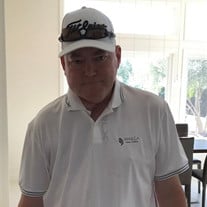 Charles Mark Minor was born May 14, 1961 in Collierville, TN. He went into the loving arms of his Lord and Savior Jesus Christ January 10th, 2019. Mark was a 1979 graduate of Collierville High School; he then attended Tennessee Technical University where he received a Bachelor of Science degree in Civil Engineering. At Tennessee Tech, Mark became a loyal member of the Kappa Sigma fraternity and took AEKDB to heart. Mark believed that his fraternity experience was one of the most influential and positive experiences of his life. He developed many lasting friendships during his fraternity experience that he cherished throughout his life. Mark completed his MBA at Samford University in 1990. Mark has been a long time resident of Stone Mountain, Georgia. Mark had many passions in life, chief among them were being a faithful follower of Jesus Christ as a longtime member of Mountain Park First Baptist Church where he was a dedicated Sunday school teacher for middle school boys. Mark was an avid hunter and also enjoyed golfing, Atlanta Braves games, playing the guitar, grilling, and staying in touch with many old friends. Mark retired from Diversitech in 2015 as VP of Eastern Operations after 23 years. He was also a devoted member of the Rotary Club of Rockdale County for 15 years. Mark is preceded in death by his loving mother, Nina C. Minor; father, Charles L. Minor; uncle, James Walter �Buddy� Bruce; and brother-in-law, Kenneth Lee Deal. Mark is survived by his wife of 20 years, Barbara Carol Minor; sons, Mark Austin Minor of Stone Mountain, GA, James Wilson Minor of Melbourne FL; sister and brother-in-law, Karen and Tommy Minor of Germantown, TN, brother, Michael Keith Minor of Red Banks MS; sister and brother-in-law, Susan and Bruce Minor Jones of Austin, TX.; and nieces and nephews. A Memorial Service will be held Tuesday, January 15, 2019 at 12:00 p.m. at Mountain Park First Baptist Church, 5485 Five Forks Trickum Road, Stone Mountain, GA 30087; with Rev. Joseph S. York officiating. Family will receive friends from 10 until 12 p.m. prior to the service at the church. In lieu of flowers, the family requests donations are made to the Winship Cancer Center at www.winshipcancer.emory.edu. Condolences may be submitted on-line at www.scotward.com. Scot Ward Funeral Services, 699 American Legion Rd., Conyers, GA, 770-483-7216.

Charles Mark Minor was born May 14, 1961 in Collierville, TN. He went into the loving arms of his Lord and Savior Jesus Christ January 10th, 2019. Mark was a 1979 graduate of Collierville High School; he then attended Tennessee Technical University... View Obituary & Service Information

The family of Charles Mark Minor created this Life Tributes page to make it easy to share your memories.

Send flowers to the Minor family.