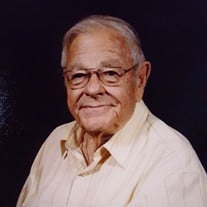 Charles Ray Seabolt, 89, of Covington, passed away peacefully on Thursday, November 29, 2018 at Abbey Hospice in Social Circle. Chuck was born February 7, 1929 in Milfay, OK to Charles Emmett and Maude Seabolt. He served faithfully in the US Air Force for 20 years and rose in rank to Master Sergeant (E7). He retired from military service in 1968 and then worked for NASA under the Apollo Moonlanding Program as an Electrical Engineer. In 1970, he and his family moved to Conyers, GA, and he remained in the area until his death. His greatest joys and love in life were his family who call him 'Pops'; his nation for whom he was a hero; and being a servant of his LORD and Savior in whatever the need. He served his community in many ways and was a volunteer chaplain at Rockdale Medical Hospital in Rockdale County. He actively participated in the Veterans of Foreign Wars, American Legion, and The Elks. Chuck served in the Rockdale County American Legion Honor Guard and participated in over 1100 funerals along with other political and community events. He was an active member of Zion Baptist Church for many years. Mr. Seabolt is survived by this third wife, Georgetta Seabolt; sister Nell Cole; son, William 'Skipper' Seabolt; 8 grandchildren, Jason (Lisa) Seabolt, Brian Seabolt, Chris (Becka) Seabolt, Mark Seabolt, Kyle (Julie) Seabolt, Josh (Olivia) Seabolt, Krystal (Matthew) Sosby, Kenny Seabolt; 18 great-grandchildren; 3 great-great-grandchildren; numerous nieces and nephews. Funeral Services will be held Thursday, December 6, 2018 at 1:00 p.m. at Zion Baptist Church with Pastor Lane Collins and Pastor R. A. Stucke officiating; interment will follow at Green Meadow Memorial Gardens. Family will receive friends Wednesday, December 5, 2018 from 5 until 8p.m. at the funeral home. In lieu of flowers, donations may be made to Zion Baptist Church at 7037 Hwy 212 N, Covington, GA 30016. Condolences may be submitted on-line at www.scotward.com. Scot Ward Funeral Services, 699 American Legion Rd., Conyers, GA, 770-483-7216.

Charles Ray Seabolt, 89, of Covington, passed away peacefully on Thursday, November 29, 2018 at Abbey Hospice in Social Circle. Chuck was born February 7, 1929 in Milfay, OK to Charles Emmett and Maude Seabolt. He served faithfully in the US... View Obituary & Service Information

The family of Charles Ray Seabolt created this Life Tributes page to make it easy to share your memories.

Send flowers to the Seabolt family.