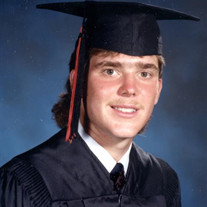 Darrell Kimsey Baxter, age 47 of Cumming, died Tuesday, July 17, 2018. He was born July 29, 1970 in Atlanta, GA to Margaret Hall and Earl Baxter. Margaret said that the minute she laid eyes on him she fell in love, they were best of friends. If you ever talked with Darrell any length of time you would hear about his Mom. He was preceded in death by his father, Earl Baxter. He is survived by his mother, Margaret Hall McCone and stepdad, Fletcher McCone of Cumming; daughters, Taylor Baxter, Lapri Baxter, Joeli Baxter; half-brother, Larry Baxter; step-brother, Mike McCone; and step-sister, Laurie Sanders. Darrell played baseball but spent more time in the outfield picking grass. He tried his luck as catcher but to stay on the team hitting the ball occasionally was required and he wasn't the best skilled at that. He then tried football. His size put him in the higher grade level but the coach would not play him because he was not mature enough for the older boys. He then decided to play soccer. He excelled at soccer and made the first team in the ninth grade. His mother coached him and he was very good. He graduated from Rockdale High School and signed a contract with Truett McConnell College on a scholarship. He also played professional soccer for the Atlanta team one year. Darrell owned a computer company, a pressure washing company, worked for the City of Conyers in the water department, worked at Behavioral Science Technology and IBM. He became disabled four years ago. Funeral Services will be held Friday, July 20, 2018 at 2 p.m. at Scot Ward's Green Meadow Chapel with Pastor Howard Greer officiating; interment will follow at Green Meadow Memorial Gardens. The family will receive friends from 12 until 2 p.m. prior to the service at the funeral home. Condolences may be submitted on-line at www.scotward.com. Scot Ward Funeral Services, 699 American Legion Rd., Conyers, GA, 770-483-7216.

The family of Darrell Baxter created this Life Tributes page to make it easy to share your memories.

Send flowers to the Baxter family.