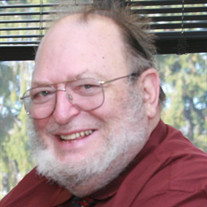 David Joseph Collins, age 74 of Conyers, died Thursday, April 26, 2018. A Memorial Service will be held Friday, May 11, 2018 at 2:00 p.m. at St. Simon's Episcopal Church, 1522 HWY 138, Conyers, GA. Family will receive friends from 12 until 2 p.m. prior to the service at the church. David was born in Albany, New York on May 7, 1943. He graduated from Chatham Central High School, Chatham, NY in 1961. He attended St. Catherine of Siena College in Latham, NY. He enlisted in the U.S. Army in 1963 and served until 1970. "A veteran is someone who at one point in his life wrote a blank check made payable to the 'United States of America' for an amount of 'up to and including my life.'" -Anonymous. During his Army Service he was a hospital corpsman, a blood bank technician and a health physicist. He met and married the love of his life while stationed at Aberdeen Proving Ground, MD. While stationed at Walter Reed Army Medical Center, he was an active building member of the National Capitol Trolley Museum. David loved his work as a Health Physicist and after leaving the Army, he completed BS degree in Radiological and Health Science at Manhattan College, Bronx, NY, in order to work as a civilian Health Physicist. He was the lead foreman for the early stages of the cleanup at Three Mile Island, Middletown, PA. He joined the U.S. Nuclear Regulatory Commission as a Health Physicist in 1983, retiring in 2010. In addition to his many volunteer roles at his church, David volunteered with several groups including, Cub Scout Pack 410, the Southeastern Railroad Museum, National Model Railroaders Association, the Gwinnett, Newton, and Rockdale Medical Reserve Corps, The Red Cross, National Park Service, Martin Luther King Jr. National Historic Park and their Trails & Rails program. He was known for his kindness and for serving his Lord and Savior through his service to others. David was preceded in death by his parents, Oliver Davis and Cecelia Rose Kasper Collins. He is survived by his wife of 53 years, Susan Dilworth Brune Collins; daughters and sons-in-law, Cecelia Ann and Paul Edward Senft, Jr., Claudia Lanier and Matthew A. Phillips; son and daughter-in-law, William Jared and Andrea Stover McLean; brothers and sisters-in-law, O. Donald and Peggy Collins, Stephen J. and Margaret Herdt Quaadman Collins, John C. and Suki Collins; best friend, Eddie L. Farmer; grandchildren, Kole, Victoria, Connor, Flint; aunt, Mary Collins; several nieces, nephew and cousins. Flowers or donations may be made to the Historic Fire Station #6 Volunteer Memorial Fund, The Martin Luther King, Jr. NHP, 450 Auburn Ave. NE, Atlanta, GA 30312 or St. Simon's Episcopal Church, P.O. Box 102, Conyers Ga 30012. Condolences may be submitted on-line at www.scotward.com. Scot Ward Funeral Services, 699 American Legion Rd., Conyers, GA, 770-483-7216.

The family of David Collins created this Life Tributes page to make it easy to share your memories.

Send flowers to the Collins family.