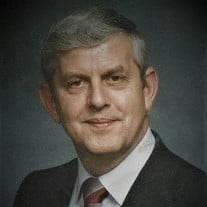 David Lynn Grimm passed away on Tuesday, January 12, 2021 at the age of 91. David leaves behind a legacy of a faithful husband, dedicated father, cherished grandfather, and loving great-grandfather. But above all, David was a Christ-follower. In addition to his wife, Joanie Book Grimm, 3 children and their spouses, 9 grandchildren, and 6 great-grandchildren, countless people around the world consider David as their family. He spent his life supporting the Christian journey of family, friends, and complete strangers by opening his home, leading numberless Sunday school classes and Bible studies, providing endless car rides, and graciously encouraging every endeavor of his adventurous wife. Retirement was not a word in David's vocabulary. He worked for Sears & Roebuck for the greater part of 40 years before becoming the administrator of Lakewood Christian Manor in Atlanta. Another 'retirement' lead him to Starcrest Assisted Living and later a greeter at Scot Ward Funeral Services. David took every role given to him with seriousness and sincerity, making choices and giving advice based on his relationship with God. He was a born administrator, leading elder groups as the Chairman of the Board at Mount Carmel Christian Church and most recently at Crosspoint Christian Church in Conyers, Ga. Through Joanie's spiritual gift of missions, David was able to embody Ephesians 5:25, 'Husbands, love your wives, even as Christ loved the church. He gave his life to it.'. He gave away his time, energy, and rooms in his house. The Grimms housed and lead to Christ people like Rajan Ipe, Dr. Spiro and Zena Doraci, and Richard Lu, a young college student from communist China whom David found confused in the Atlanta airport. That was the kind of man David was: a man who saw a need and helped fill it. Because of his Christian faith, his family is comforted by the truth that January 12 will not be the last day they see him. From the many memory verses highlighted in his Bible, Joanie wishes to share Colossians 3:17, 'And whatever you do, in word or deed, do everything in the name of the Lord Jesus, giving thanks to God the Father through him.' PRIVATE FAMILY SERVICES WERE HELD. In lieu of flowers, donations can be made to www.luke101.com . All gifts will be split between Kerala Christian Mission in India and H.O.M.E. in Haiti. Condolences may be submitted on-line at www.scotward.com. Scot Ward Funeral Services, 699 American Legion Rd., Conyers, GA, 770-483-7216.

David Lynn Grimm passed away on Tuesday, January 12, 2021 at the age of 91. David leaves behind a legacy of a faithful husband, dedicated father, cherished grandfather, and loving great-grandfather. But above all, David was a Christ-follower. In... View Obituary & Service Information

The family of David Lynn Grimm created this Life Tributes page to make it easy to share your memories.

Send flowers to the Grimm family.