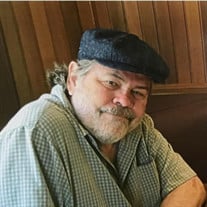 Dr. David Monroe Yarbrough, a husband, a father, son, brother, and friend, passed away unexpectedly on June 24, 2021, at the age of 70. He provided emotional support, love and leadership to his family and friends. This included the hundreds of families he loved and assisted for over 35 years as a family and clinical psychologist in Conyers, Georgia. David was a man of many talents. He loved his wife Barbara who he met at the University of Florida when they were 18 years old. He was an avid Gator fan and supported University of Florida athletics. He loved the outdoors and took a father-daughter trip every year while his daughter, Sara, was growing up. He supported his son in Boy Scouts and in all Gabe's athletic endeavors, especially baseball. He collected antique weapons of all kinds and was known as Axe Man to most of his longtime friends. David was a voracious reader who was always recommending books and articles to everyone he knew. He also greatly enjoyed cooking and going out to restaurants. He always had a recommendation on a place to eat no matter where you were going for all his friends and family. David received a bachelor's degree as well as a specialty degree from University of Florida. He went on to receive his doctorate in psychology from University of Georgia and also completed an internship in medical psychology at Medical College of Georgia in Augusta. David is survived by his wife of 45 years, Barbara Koran Yarbrough of Miami Florida, his daughter Sara and her husband Ethan Young, and his son Gabe Yarbrough and his partner Paige Johnson. They are expecting Dave's first grandson, Ezra James, this October. Other surviving family include his brother and sister-in-law, Bruce and Francis Koran, his 'adopted son' Endre Brown, and 'sister' and mentor Carrell Dammann. He will also be missed by his many friends, colleagues, and patients. David had a special place in his heart for his canine pals. First Murray the basset and then Roland the border terrier were his therapy dogs and constant companions at his office. He and his patients always laughed at their many antics. A special memorial service and celebration of his life will be held at Scot Ward Funeral Services in 699 American Legion Road, Conyers, Ga 30012 on July 14, 2021, at 6pm followed by a reception for story telling in their reception hall. Dressler's Funeral Home in Atlanta is handling all other arrangements. The service in Conyers will be officiated by Rabbi Jesse Charyn. In lieu of flowers, please consider making a donation in David's memory to: Temple Beth David, 1885 McGee Rd., Snellville, GA 30078 or the Atlanta Humane Society, 981 Howell Mill Rd. N.W., Atlanta, GA 30318 or the Wounded Warrior Project, 855-448-3997. Condolences may be submitted online at www.scotward.com. The memorial service can be viewed live beginning at 5:55pm on the Scot Ward website listed above. David will be greatly missed by the many lives he touched.

Dr. David Monroe Yarbrough, a husband, a father, son, brother, and friend, passed away unexpectedly on June 24, 2021, at the age of 70. He provided emotional support, love and leadership to his family and friends. This included the hundreds... View Obituary & Service Information

The family of David Monroe Yarbrough created this Life Tributes page to make it easy to share your memories.

Send flowers to the Yarbrough family.