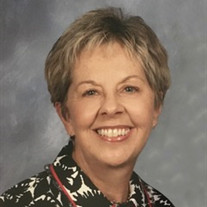 Mrs. Diane Ward Gatewood passed away Saturday, May 2, 2020, at her home in Columbus, Mississippi. She was born November 14, 1941, in Atlanta, Georgia, to the late Horis A. Ward and Sara Ward. Diane graduated from Murphy high school and then from Baylor University in 1963 with a degree in music education. She and her late husband, Dr. James Verner Gatewood, met in conjunction with their involvement in the Baylor University choral program. Diane and James moved to Columbus, Mississippi in 1968 following James's graduation from the Baylor College of Dentistry. Diane was a dedicated member of First Baptist Church where she enjoyed singing, directing and teaching in numerous music ministry programs. In addition, Diane served in leadership of the annual First Christmas interactive Bethlehem village and with James, as the director of the initial capital funds campaign for the new First Baptist Church Columbus campus. Diane loved Columbus and Lowndes County, serving as a lifetime member in Junior Auxiliary, a devoted docent of the Stephen D. Lee Home Museum and as a member and past president of the Northwood Garden Club. Diane also taught 5th grade at Heritage Academy and most recently worked for Visit Columbus and the Columbus Cultural Heritage Foundation. She found great joy in telling guests from around the world about the unique history of the town she dearly loved. Diane was a beloved wife, mother and grandmother. She is preceded in death by her husband of 49 years, Dr. James Verner Gatewood. She is survived by her son, David Ward Gatewood and his wife, Tina; daughter, Leigh Anne Gatewood Carmichael and her husband, Steve; brother, Alec Ward and his wife, Patti; brother, Richard Ward and his wife, Daphene; and her treasured grandchildren, Harrison Carmichael, Hadley Carmichael, and Lucas Gatewood. A private interment will be held at Fairview Memorial Gardens in Stockbridge, Georgia. There will be a celebration of Diane's life in Columbus for all to attend as soon as it can be safely scheduled. Notification for this celebration will be by social media and newspaper. In lieu of flowers, the family requests memorials be made to the First Baptist Church 'Because He Lives - Crossing Building Campaign, PO Box 829, Columbus, MS 39703, online at https://www.columbusfbc.org/ or to the Stephen D. Lee Home & Museum, 316 7th Street North, Columbus, MS, 39701. Condolences may be submitted on-line at www.scotward.com. Scot Ward Funeral Services, 699 American Legion Road, Conyers, GA 30012, 770-483-7216.

Mrs. Diane Ward Gatewood passed away Saturday, May 2, 2020, at her home in Columbus, Mississippi. She was born November 14, 1941, in Atlanta, Georgia, to the late Horis A. Ward and Sara Ward. Diane graduated from Murphy high school and then... View Obituary & Service Information

The family of Diane Olivia Gatewood created this Life Tributes page to make it easy to share your memories.

Send flowers to the Gatewood family.