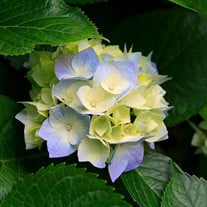 Ellen McCart Trainer died December 21, 2021 at the age of 99. She was born February 11, 1922 the third of five daughters of Walter Lewis McCart and Ruth Suese Almand McCart. Her father was sheriff of Rockdale County for many years and her mother was a teacher and school principal. She graduated from Conyers High in 1939 and in 1940 from Greenleaf School of Business in Atlanta. She immediately began work at American Associated Companies where she would work as Credit and Collection Manager until she retired in 1997. She attended Georgia State University during the forties and in 1958 graduated from Atlanta Law School. Ellen was always seeking to broaden her education by taking a variety of classes and courses ranging from Dale Carnegie to Christian Education at Mercer University to various credit management training courses. In 1982, she received a scholarship to attend Dartmouth College where she received the Executive Award at the National Association of Credit Management Graduate School of Credit and Financial Management. Ellen represented American Associated Companies at the National Association of Credit Management NACM, Southeast Unit soon after beginning her job and through the years served as a Director, Board Member, and Chairman of the Board and was awarded a Lifetime Membership. This same Unit had an Atlanta Credit Club which was for men only. When they finally decided to allow women Ellen was the first asked to join. In the sixties she was instrumental in starting a new Credit Group under the NACM banner that was for credit managers, not owners, to discuss common credit problems. This grew to be a highly successful avenue for improvements. Ellen loved Rockdale County and gave her time to many of its organizations. As a member of First Baptist Church in Conyers, she served many years as Secretary of Sunday School. She was a charter member of Gleaner Chapter #347 Order of the Eastern Star, Junior Service League president, charter member and officer and tireless worker of the Pilot Club, a Rockdale Historical Society Trustee and member of the Rockdale Genealogical Society. She also found time to learn tax preparation from H&R Block and worked for them nights and weekends for 25 years. She particularly enjoyed the many interactions which that experience afforded her with people in Rockdale County. After WWII ended Ellen�s mother encouraged her to join a friend for a train tour of the western United States. Leaving from Atlanta, they toured in Missouri, New Mexico, and the Grand Canyon where she flew over the canyon in a Navy reject four seat plane with no engine cover! From there they toured cities up the Pacific coast across Canada to Chicago then home. All for the grand sum of $400! Thus began a lifetime of travel to over fifteen countries and all over the United States. In 1950 Ellen married David Trainer and was married until his death in 1971. In addition to her husband and her parents she was preceded in death by her sisters Lavinia Lindley, Olivia Haydel, Dorothy Cornwell and Hilda Corry. She is survived by nieces and nephews Lulu (Lane) Brown, Buddy Haydel, Jan Haydel, Walter Haydel, Larry (Nancy) Cornwell, Wayne Cornwell, Keith (Karen) Cornwell, Susan (Tracy) Parker, and Mac (Jody) Corry. Visitation will be at 11:00 AM on December 23, 2021 at Scot Ward Funeral Services (699 American Legion Road, Conyers, GA 30012), with a graveside service immediately following at 11:30. In lieu of flowers, donations may be made to the Olivia Haydel Senior Center, 1240 Dogwood Drive, Conyers, GA 30012. Condolences may be submitted on-line at www.scotward.com. Scot Ward Funeral Services, 699 American Legion Road, Conyers, GA 30012, 770-483-7216.

Ellen McCart Trainer died December 21, 2021 at the age of 99. She was born February 11, 1922 the third of five daughters of Walter Lewis McCart and Ruth Suese Almand McCart. Her father was sheriff of Rockdale County for many years and her... View Obituary & Service Information

The family of Ellen Trainer created this Life Tributes page to make it easy to share your memories.

Send flowers to the Trainer family.