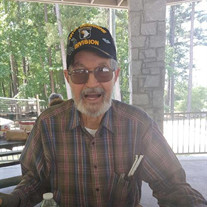 Mr. Eugene (Gene) Walter Baker, Jr., age 96 of Conyers, died Sunday, September 27th, 2020. He was preceded in death by his wife of seventy-three years, Mollie Margaret Baker; son-in-law George Burnett; parents, Eugene and Willie Mae Baker. He is survived by his daughters, Cheryl Burnett, Cathy Riso (Rick); son, Eugene W. Baker III (Angela); seven grandchildren and four great-grandchildren; many nieces, nephews and cousins. Gene was a loving husband, caring father, doting grandfather as well as a loyal friend and neighbor. He lost his father at the age of twelve during the Great Depression and joined the United States Army at the age of sixteen. Beginning in 1940, he served with the 28th Infantry Regiment and volunteered in 1941 to be a paratrooper. Gene was one of the original solders that formed the 502nd Parachute Infantry Regiment which would later be expanded to become the 101st Airborne Division. He served with the 502nd PIR throughout all of World War II, parachuting into combat in Normandy for Operation Overlord and into Holland for Operation Market Garden. He was one of the Battling Bastards of Bastogne, fought in the Rhine and Ruhr operations before ending the war fighting at Berchtesgaden. After the war, Gene farmed in Morrow, Georgia until becoming a home builder, real estate agent, appraiser and ending his career as a banker. Gene worked tirelessly in the community for many causes. He was active in local and state grassroots politics, as well as, served as a church deacon and Sunday School teacher. He was active in the veterans airborne community and had served as President of the Georgia Airborne Association. He was most recently a member of the Philadelphia United Methodist Church. Known as Jr., when he was younger and Big Gene as an adult, Gene touched the life of everyone he knew and will be missed by all. Visitation will be held Saturday, October 3, 2020 from 4:00 p.m. to 7:00 p.m. at Scot Ward Funeral Home. Funeral services will be held Sunday, October 4, 2020 at 1:30 p.m. at the Scot Ward's Green Meadow Chapel in Conyers, Ga., with Pastor Phil Budensiek officiating; interment will follow at 3:00 p.m. at Forest Hills Memorial Garden in Forest Park. Condolences may be submitted on-line at www.scotward.com. Scot Ward Funeral Services, 699 American Legion Rd., Conyers, GA, 770-483-7216.

The family of Eugene Walter Baker, Jr. created this Life Tributes page to make it easy to share your memories.

Send flowers to the Baker family.