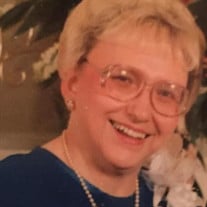 Frances Kelley Strickland, died peacefully on Friday, April 17, 2020 after a brief illness. She was 81 years old. Formally Lila Frances Kelley of Lithonia, GA, Mrs. Strickland was married to the late Command Sergeant Major (Ret) Charles E. Strickland Jr., of Stockbridge, GA, They were married for 59 years. She was preceded in death by the late Baynard Franklin Kelley (father), Lila Susan Phillips Kelley (mother) and Phillip Allen Kelley (brother) of Lithonia, Georgia.Born on November 22, 1938 in Atlanta, GA, Mrs. Strickland grew up in West End Atlanta and later in Lithonia GA. She graduated Lithonia High School in 1956. She began work with The Citizens & Southern (C&S) National Bank in Atlanta GA in 1956 as a bookkeeper and worked in the Proof Department at C&S on Mitchell Street. She later was promoted to Bank Teller and moved to the Avondale Estates Office for a number of years. She later moved to C&S on Covington Hwy in Decatur GA. C&S was purchased by NationsBank in the late 80's and she moved to NationsBank on Evans Mill Rd where she retired in 1991. Mrs. Strickland was a member of the Eastern Star in Starlight Chapter #421 where she served as Past Matron. She and her husband Charles later transferred to Morrow Lodge for the Eastern Star. Mrs. Strickland was also a member of the Daughters of the American Revolution as well as the United Daughters of the Confederacy. Mrs. Strickland had two sons, Charles E. 'Chuck' Strickland, Ill and his children, Charles Chase Strickland and Charisma Kelley Strickland (Starlet B. Strickland, mother); David F. Strickland and his children, Ashley Danielle Strickland, Allison Tiffany Strickland (Leslie D. Strickland, mother) and Kimberly Michelle Strickland (Michelle Strickland, mother). Mrs. Strickland had one older brother, Phillip Allen Kelley who died in 1938 as an infant, and her younger sister Patricia (Pat) Kelley Richardson (Sister) and brother in-law Jarrell Richardson of Clearwater Florida. Pat and Jarrell's children, Jennifer Bryant and her family in Cincinnati, Ohio, Susan Johnson and her family in Clearwater, FL; nieces, nephews, aunts, uncles and cousins. Limited funeral services will be held Monday, April 20, 2020 at 2 p.m. at Scot Ward Funeral Services, in Conyers, GA. A live stream of the service can be viewed on-line at www.scotward.com; interment and graveside services will follow at the church cemetery at Union United Methodist Church in Stockbridge, GA. The Rockdale County Sheriff's Office will provide escort services to the graveside at 3:00 pm. Family will receive friends in limited numbers on Sunday, April 19, 2020 from 3 until 5 p.m. Flowers will be accepted or in lieu of flowers, donations can be made to Union United Methodist Church or the Alzheimer's Foundation. Condolences may be submitted on-line at www.scotward.com Scot Ward Funeral Services, 699 American Legion Road, Conyers, GA 30012, 770-483-7216.

The family of Frances Kelley Strickland created this Life Tributes page to make it easy to share your memories.

Send flowers to the Strickland family.