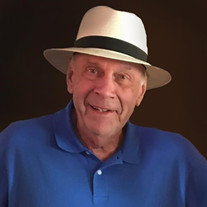 Franklin Lloyd Zahm, age 82 of Conyers, died Thursday, November 18, 2021. Frank was an active member of his church, Epiphany Lutheran Church for 30+ years and a prominent part of the town of Conyers, GA for 40 years. He was born in Buffalo, NY but had been living in Georgia since 1963 when he joined the Army and was stationed in Columbus, GA. He was a licensed Optician before joining the service, and spent his years in the Army stationed as a medic during the Vietnam War fitting servicemen with eyeglasses and gas masks. Frank met his wife, JoAnn, on a blind date in 1964 while he was stationed in Georgia and they married in 1966. They were devoted to each other every day for 55 years up until his recent death. Frank was a business owner, opening his Optician's office, Cobb Optics, in Marietta in the early 1980s. He was known for driving his beloved 1973 Volkswagen Bug from Conyers to Marietta every single day of his long career. He was a successful businessman due to his love of his trade and tremendous care for people, until he retired in 2009. Frank was incredibly active in his community, acting as Head Usher in his church for 30 years, volunteering for countless local activities, and even representing his community in the national Senior Olympics where he won the gold medal for Shuffleboard in 2011. Since retiring, he and JoAnn had become active members of the Rockdale Senior Center, where he spent many days with his friends, including his last day. Frank was preceded in death by his parents, Raymond Edward and Martha Zahm; brothers, Leland Zahm, Raymond Edward Zahm, Jr.; and sisters, Catherine Leffler, Mary Kuczynski. Frank and JoAnn had one son, Nathan (Jill), and two granddaughters, Amelia (9) and Lillian (5). In addition to his son, Frank is survived by a number of nieces and nephews who adored him. He loved being a dad, grandpa, and uncle, and was an incredibly important and present part of everyone's lives in their family. Frank loved everyone he met, and everyone he met loved him. He was a lover of our Country, a lover of all people, a teller of the best bad dad jokes, and an all-around good person. It was tough to be in a bad mood around Frank, as he was always the life of the party and a positive influence on anyone he met. A Memorial Service will be held Saturday, December 11, 2021 at 2 p.m. at Epiphany Lutheran Church. Visitation with the family will be at the church starting at 1 p.m. In lieu of flowers, the family would ask for donations to be sent in Frank's memory to Epiphany Lutheran Church, 2375 Highway 20 SE, Conyers, GA 30013. Condolences may be submitted on-line at www.scotward.com. Scot Ward Funeral Services, 699 American Legion Rd., Conyers, GA, 770-483-7216.

Franklin Lloyd Zahm, age 82 of Conyers, died Thursday, November 18, 2021. Frank was an active member of his church, Epiphany Lutheran Church for 30+ years and a prominent part of the town of Conyers, GA for 40 years. He was born in Buffalo,... View Obituary & Service Information

The family of Franklin Zahm created this Life Tributes page to make it easy to share your memories.

Send flowers to the Zahm family.