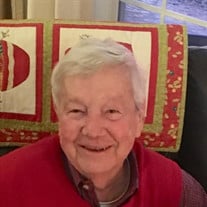 Fred Wilson, age 82, passed away peacefully Saturday, December 8, 2018 at his home in Covington in the presence of his wife, children and dog. He was born in Montezuma, GA and was the son of the late Albertus Wilson and Bessie Doles Wilson of Macon, GA. Fred was a graduate of Lanier High School, attended Georgia Tech and served as a Reserve in the Navy. He was employed by the Georgia Department of Transportation for thirty-four years. He was an active member of Mount Carmel Christian Church where he served as a deacon, a youth group leader and member of the church builders. He was most recently a member of the First United Methodist Church in Covington, GA. Fred was active in the following organizations, Kiwanis; DeKalb County Jaycees, where he served as state and regional president; Gideons; and Wood Turners of north GA. He had a second home in Hiawassee, GA where he was active in the community. Fred is survived by his wife of fifty-nine years, Barbara Davis Wilson; three children and spouses, Kim Kincaid, Beth and Randy Messick, Adam Wilson and Jeremy Miller; six grandchildren, Ellen Messick, Sarah Messick, Karly Moss, Erin Quattrochi, Philip Lenox, and Madelyn Wilson; four great-grandchildren, Eli, Freyja, Davis and Tucker; one brother and wife, Harold and Mary Wilson; one brother-in law, Eddie Davis; one uncle and wife, Reverend Charles and Carolyn Wilson. Fred is preceded in death by three brothers, Al Wilson, Warren Wilson, and Walter Wilson. Funeral services will be held at 2:00PM Wednesday, December 8, 2018 at Scot Ward Funeral Home. Burial will follow at Fairview Cemetery. The family will receive friends prior to the service beginning at 12:00PM at the funeral home. In lieu of flowers, contributions may be made to https://www.pennieswithpurpose.org/give-now.html. Condolences may be submitted on-line at www.scotward.com. Scot Ward Funeral Services, 699 American Legion Road, Conyers, GA 30012, 770-483-7216.

Fred Wilson, age 82, passed away peacefully Saturday, December 8, 2018 at his home in Covington in the presence of his wife, children and dog. He was born in Montezuma, GA and was the son of the late Albertus Wilson and Bessie Doles Wilson... View Obituary & Service Information

The family of Fred Adams Wilson, Sr. created this Life Tributes page to make it easy to share your memories.