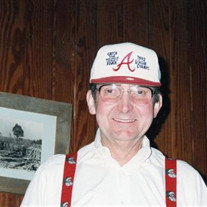 Gary Gaines Holder, age 86, passed away Thursday, March 31, 2022, at his home in Conyers. He was holding hands with his sweet wife of twenty-eight years, Mrs. Mary Ann Gudger Holder, when he left this world. He was born on August 19, 1935 in Kannapolis, North Carolina to the late John Irvin and Cleo Bentley Holder. Gary was preceded in death by his parents, John and Cleo Holder; and beloved sister, Linda Jo Sidwell of Eatonton. He is survived by his wife, Mary Ann; daughter, Cynthia Holder Thomason (Kenneth); step daughter, Virginia Ann Bowen (Tom); step sons, Joe Gudger (Beth), Greg Gudger (Melissa), and David Gudger (Zola); brother, John Holder (Nancy); grandchildren, Kelly Goolsby (Brian), Lindsey McGowan (Thomas Jr.), Molly Stone (Billy), Maegan Anders (Brandon), Blake Gudger, Zoey Gudger, Josie Gudger, Kaitlin Richard (Matt), Cody Gudger, Gus Bowen, Gaelan Bowen, and Thomas Bowen (Jessica); and many adored great-grandchildren, including James J.T. and Claire Goolsby, Maelly and Marin Anders, Gage Gudger, Jackson Richard, and Braydon Gudger. Our Gramps led an amazing life that took him throughout the United States, and around the world. After graduating high school, he joined the United States Army and served from 1953 to 1958. After the military, he worked for J.P. Stevens & Co Woolen Mill in Milledgeville, Ga. During his time, he volunteered to be trained on 'this new computer' that the company would be using to streamline different processes. This opportunity kicked off a nearly forty-year career in data processing, mainframes, and software development. The boy from Kannapolis, North Carolina, with no formal college education, would go on to develop the software for NASA's Apollo Capsule's Simulator. He would write the baggage claim software for over fifty airports, including Hartsfield-Jackson Airport, and eventually retired in 2000 from SITA, an IT company serving the air transport industry. He spent the next twenty-two years living life to the fullest with the love of his life traveling and spending time with friends and family. Gramps was a member of Ebenezer Methodist Church. He loved the Lord and taught us to do the same. He celebrated over fifty years active in Alcoholics Anonymous not only helping himself, but helping countless others beat their addiction. Gramps had just received his forty-eight-year chip! An avid Braves fan, he was so excited to have seen the 2021 World Series win. He also loved Georgia State football and Duke basketball. Most of all, Gramps loved his family. Whether it was family reunions, birthday parties, or holidays, he would rather be nowhere else. One of the last things Gramps said was, 'I love life more than anyone ever has.' Not only did he love it, but he knew how to live it right! Funeral Services will be held Tuesday, April 5, 2022 at 1:00 PM at Ebenezer United Methodist Church with Rev. Dr. Sheila Crowe-Hinchee and Byron Ahrens officiating. The family will receive friends Tuesday, April 5, 2022 from 12:00 PM to 1:00 PM at the Church. Condolences may be submitted on-line at www.scotward.com. Scot Ward Funeral Services, 699 American Legion Rd., Conyers, GA, 770-483-7216.

Gary Gaines Holder, age 86, passed away Thursday, March 31, 2022, at his home in Conyers. He was holding hands with his sweet wife of twenty-eight years, Mrs. Mary Ann Gudger Holder, when he left this world. He was born on August 19, 1935 in... View Obituary & Service Information

The family of Gary Holder created this Life Tributes page to make it easy to share your memories.

Send flowers to the Holder family.