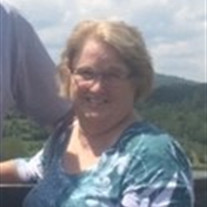 Gloria Pickens Young, age 72 of Conyers, died Friday, August 28, 2020 at Piedmont Rockdale Hospital after a long battle with heart disease. She was preceded in death by her parents, Marvin Carl Pickens and Martha Pickens Halcome. She is survived by her husband of 52 years, Dwain Young; sons, Scott Young (Rebecca), Kevin Young (Angie); grandchildren, Payton Young, Jenna Young, Wyatt Young, Jaxson Young, Lenora Young; brothers, Donnie Pickens, Michael Pickens (Teresa); sisters, Pat Nolan (Ed), Karen Robinson (Ray), as well as numerous nieces and nephews. Gloria attended Lithonia High School graduating in 1966. In 1968, she married Dwain Young, of Conyers, and that is where they resided. Gloria worked for several years at ABC Awards and then for the Young's family business until she decided to retire in the late 1990's. Gloria was a loving devoted wife, mother, sister to her family and 'Nana' to her grandchildren. She enjoyed traveling with Dwain and friends on motorcycle trips. Once she could no longer travel, she made sure to keep up with family and friends on Facebook. Gloria was known for her compassion and willingness to help others. She will be greatly missed by all those who knew her. Funeral services will be held Friday, September 4, 2020 at 11:00 AM at Scot Ward's Green Meadow Chapel; Reverend. Matt Stewart will be officiating; interment will follow at Green Meadow Memorial Gardens. The family will receive friends Friday, September 4, 2020 from 9:00 AM to 11:00 AM at the funeral home. In lieu of flowers, those who wish to do so, may make a donation to Milstead Baptist Church or a charity of their choosing in memory of Mrs. Gloria Young. Condolences may be submitted on-line at www.scotward.com. Scot Ward Funeral Services, 699 American Legion Rd., Conyers, GA, 770-483-7216. For those unable to attend the service in person, we would like to invite you to view the service live from the chapel via live stream on, Friday, September 4, 2020 at 11:00 AM.

Gloria Pickens Young, age 72 of Conyers, died Friday, August 28, 2020 at Piedmont Rockdale Hospital after a long battle with heart disease. She was preceded in death by her parents, Marvin Carl Pickens and Martha Pickens Halcome. She is survived... View Obituary & Service Information

The family of Gloria P Young created this Life Tributes page to make it easy to share your memories.

Send flowers to the Young family.