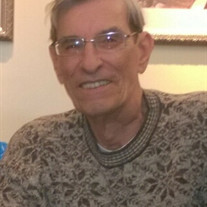 Gregory Frank Jesky, 75, of Conyers, died Tuesday, July 28, 2020, after a prolonged battle with congestive heart failure. He is survived by his wife of 53 years, Linda Jesky; his two sons, Jeff and Chris Jesky; his daughters-in-law, Tammy and Michelle Jesky; his two grandchildren, Steven Frank and Katelyn Rose Jesky. Greg attended Holy Name Catholic School in Cleveland, Ohio. He received his Bachelor of Science Degree in Mathematics from Georgia State University. At age 17, the Ohio high school state All Star Pitcher received an offer to play from the Boston Red Sox. Instead, he opted for his college education, during which time he met and married Linda. His love for baseball and basketball continued throughout his life in his coaching of his sons and other children. A BellSouth employee for 30 years, Greg worked with Nobel prize winning mathematicians and scientists on advanced telecommunications projects. He also oversaw the creation and implementation of the 911 emergency call system. After retiring as a District Manager, he became a Vice-President for ENA, a communications technology company. With his son Chris, Greg later founded Communication Resolutions Inc., from which he retired in 2016. Greg enjoyed his favorite hobby, fishing, with his two sons and his grandchildren. He loved children and opened his heart and home to all. A parishioner of St. Pius X Catholic Church in Conyers since 1988, Greg served in ministry as an usher. In lieu of flowers, donations may be made to the Piedmont Healthcare Foundation, 2001 Peachtree Rd NE, Suite 400, Atlanta, GA, 30309. Reference checks as 'gift donation, Samsky AHFC' on the memo line. Samsky Advanced Heart Failure Clinic supports advances in heart transplantation and implantation of LVADs to assist those with heart failure and those awaiting the gift of a new heart. Greg's Memorial Mass will be Friday, August 7, 2020 at 10 am at St. Pius. Reverend Fr. John Kieran will officiate. Due to attendance restrictions for COVID19, the Memorial Mass will also be live-streamed. St. Pius is located at 2621 Hwy 20, SE, in Conyers, 30013-2424. Condolences may be submitted on-line at www.scotward.com. Scot Ward Funeral Services, 699 American Legion Rd., Conyers, GA. 770-483-7216

Gregory Frank Jesky, 75, of Conyers, died Tuesday, July 28, 2020, after a prolonged battle with congestive heart failure. He is survived by his wife of 53 years, Linda Jesky; his two sons, Jeff and Chris Jesky; his daughters-in-law, Tammy and... View Obituary & Service Information

The family of Gregory 'Greg' Jesky created this Life Tributes page to make it easy to share your memories.

Send flowers to the Jesky family.