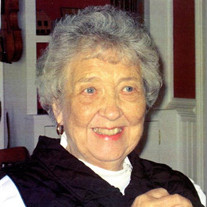 Guelda Smith Granade died Tuesday, March 24, 2020. Born January 20, 1931, in Maysville, Georgia, Guelda was the eldest of three children born to Selwyn and Zuline Thompson Smith. At North Georgia College, the pretty co-ed was the NCO Club Sponsor, a Yearbook Beauty, and Queen of the Harvest Festival, and she attracted the attention of the person who became her life's love, Al Granade, from Conyers, Georgia. Guelda and Al were married May 27, 1951 and immediately headed for Fairbanks, Alaska, where Al was stationed with the U.S. Army. Al and Guelda began their family while on the move in the military, with daughter Deb born in Fairbanks, AK and daughter Jenny born in Enterprise, AL. After leaving the Army, Guelda, Al and daughters returned to Georgia, settling in Marietta. Guelda stayed home to raise the girls when they were very young, and her family became faithful and active members of First Baptist Church of Smyrna. When the girls reached school-age, Guelda began a career in retail with Rich's. After retiring from retail, and overcoming non-Hodgkin lymphoma, she returned to work with the Internal Revenue Service, from which she retired in 1993. In every stop along her working career, Guelda made many lifelong friendships. Guelda, known as GG by her grandchildren, was a wonderful cook, and her family loved her specialties: zucchini bread, oatmeal cookies, pear relish and apple butter. Guelda's family was her first priority and her joy, and her favorite place was wherever her family gathered. For thirty-five years GG took her family to Sunset Beach, North Carolina, building a lifetime of wonderful memories. At the beach, she always had a puzzle in progress and never went a day without playing in a fiercely competitive Rummikub game. Guelda is survived by Al Granade, her beloved husband of almost sixty-nine years, daughters Deb Robinson (Michael) and Jenny Shell (Gary), grandchildren Martha Shell Dinges (Andy), Andrew Shell (Alla) and Rob Shell (Eva), and great-granddaughters Caroline and Annie Dinges, as well as Guelda's younger sister, Hilda Hill (Charles), and several nieces and nephews. Guelda was predeceased by her brother Larry Smith. There will be a private family graveside service. Memorials may be made to the Atlanta Community Food Bank, 3400 North Desert Drive, Atlanta, GA 30344, www.acfb.org. Condolences may be submitted on-line at www.scotward.com. Scot Ward Funeral Services, 699 American Legion Road, Conyers, GA 30012, 770-483-7216.

The family of Guelda S. Granade created this Life Tributes page to make it easy to share your memories.

Send flowers to the Granade family.