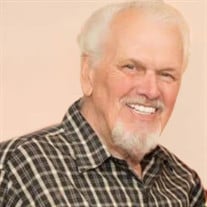 What is grief, but love persevering? On Saturday, April 17, 2021, Homer Alvin Allgood aged 82 of Conyers, Georgia, passed quietly surrounded by his family. He was preceded in death by his mother, Effie Inez Beasley (née Pirkle), and his father, Homer Glenn Allgood. Alvin was a family man, engineer, car enthusiast, and hunter. He was passionate about his projects, ranging from rebuilding cars to designing and building houses. He never met a car auction or auto race he didn’t like. At a young age, he started working for First National Bank of Atlanta as a maintenance engineer. He worked for them for over 34 years, rising through the ranks to Vice President of Maintenance and Facilities for Wells Fargo at the time of his retirement. His constant companion over the past 61 years is his wife Barbara Ray Allgood (née Agnew). Together they raised four children. They worked as a team on nearly all his projects, and together achieved and surpassed many of their life goals. After retirement, they enjoyed spending time together at their home at Lake Hartwell. He is survived by his wife Barbara, their four children and their families - Michael Allgood, Candace Frazier and her husband Len Frazier, Tanya Allgood, Toni Millikan, and Nivla Calcinore, his daughter from a previous marriage, as well as grandchildren Chloe and Jay Frazier, Adam Kelley and his wife Kim Kelley, Trey Calcinore and his partner Audrey Detrick, and great grandchildren Reeve and Walter Kelley, Cade and Colt Calcinore, and his sister Myrtie Kate Reep (née Allgood). Viewing will be held at Scot Ward Funeral Services in Conyers, Georgia, on Tuesday, April 20, from 1:00 pm to 3:00 pm, followed by his memorial service. In lieu of flowers, the family asks that donations be made to the American Cancer Society in Alvin’s memory. Condolences may be submitted online at www.scotward.com. Scot Ward Funeral Services, 699 American Legion Rd., Conyers, GA, 770-483-7216.

What is grief, but love persevering? On Saturday, April 17, 2021, Homer Alvin Allgood aged 82 of Conyers, Georgia, passed quietly surrounded by his family. He was preceded in death by his mother, Effie Inez Beasley (née Pirkle), and his father,... View Obituary & Service Information

The family of Homer Alvin Allgood created this Life Tributes page to make it easy to share your memories.

What is grief, but love persevering?

Send flowers to the Allgood family.