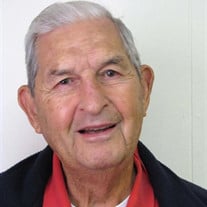 Jack B. Simpson, the oldest active duty lawman in the Country, passed away on Wednesday, August 5th, 2020, at the age of 96. He leaves behind a loving family in his wife, Dorothy; children, Barbara, Robert Mark, and Joan; two nieces; 7 grandchildren and 1 great-grandchild. Born on July 4th, 1924, Mr. Simpson was destined to be a patriot. Growing up an Eagle Scout, Jack joined the Army during WWII and earned two Bronze Stars for his service on the beaches of Anzio and in the liberation of the Dachau concentration camp. Jack dutifully dug a foxhole every night, to which he credited his survival. Upon his return, Jack went to college, earning a Master’s degree and a belief in the power of education. Jack became a special agent with the FBI, participated in the desegregation of our schools, and helped to secure justice for the murder of his fellow WWII veteran, Lt. Col. Lemuel Penn. After retiring, Mr. Simpson continued to serve his community as an investigator with the Rockdale and Newton County Sheriff’s Offices. He also authored several books and wrote a column for the Rockdale Citizen. Mr. Simpson could never imagine himself idled. As his time came to an end, he reflected that he had been present for so much history from the Great Depression to the invention of smartphones. Throughout it all, Jack exemplified hard work and a willingness to sacrifice for the greater good. Those values did not die with him. Mr. Simpson carried his family’s name with pride and honor and advanced its status in a positive, productive manner. He leaves his example of respect for all to the colleagues he held in such high esteem, the community he lived in and served and his descendants who proudly follow in his footsteps. Funeral services will be held Wednesday, August 12, 2020 at 10:30 a.m. at Scot Ward's Green Meadow Chapel with Chaplain Paul Gunter officiating; a private interment will be held at Georgia National Cemetery. The family will receive friends Tuesday, August 11, 2020 from 2:00 p.m. to 4:00 p.m. and 6:00 p.m. to 8:00 p.m. at the funeral home. In lieu of flowers, the family requests donations be made in Jack's honor to The Random Acts of Kindness Program, Newton County Sheriff's Office, 15151 Alcovy Road, Covington, GA 30014. Sheriff Brown stated Jack was an enthusiastic supporter of this program of community support delivered at the initiative of the deputies when a County citizen needed a helping hand. Condolences may be submitted on-line at www.scotward.com. Scot Ward Funeral Services, 699 American Legion Rd., Conyers, GA, 770-483-7216. A live stream of the funeral service will be provided and will be available at 10:30 a.m., see the link posted below. We would love to invite all of our extended family and friends to join with us to help celebrate the life of Jack. You can access the live stream at, https://www.scotward.com/obituaries/Jack-Simpson-5/#!/Obituary Due to the unforeseen circumstances in the world right now, the family asks those that do come to pay respects in honor of Jack's life, that a mask be worn.

Jack B. Simpson, the oldest active duty lawman in the Country, passed away on Wednesday, August 5th, 2020, at the age of 96. He leaves behind a loving family in his wife, Dorothy; children, Barbara, Robert Mark, and Joan; two nieces; 7 grandchildren... View Obituary & Service Information

The family of Jack B. Simpson created this Life Tributes page to make it easy to share your memories.

Jack B. Simpson, the oldest active duty lawman in the Country,...

Send flowers to the Simpson family.