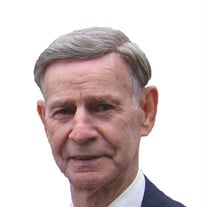 James Edward Armstrong, Sr., age 97, passed away on July 13, 2018 in Marietta, Georgia. He was admired by all who knew him and cherished by his family. Jim, as he was known by many, was born in Nelson, Georgia to the late Luther and Myrtle (Gaddis) Armstrong. He was a standout basketball player in high school and was named to the Georgia high school all-stars. He attended Piedmont College on an athletic scholarship and was later inducted into the Piedmont College Athletic Hall of Fame. He was trained as a pilot in the Army Air Corp during World War II. After being discharged from the Army, Jim moved to Atlanta and began a thirty-plus year career working for AT&T and its subsidiaries, the majority of which was spent in marketing, primarily with government and airline accounts. In 1950, Jim married Marilyn Cagle of Atlanta and they lived in Decatur where they raised their family. He coached little league and taught Sunday School at Gresham Park Baptist Church. Jim retired from AT&T in 1980 and soon afterwards he and Marilyn moved into a new home in Rockdale County. They were members of Glenwood Hills Baptist Church where he served as a deacon. He enjoyed gardening, playing tennis and volunteering. He and Marilyn loved to dance and frequented the local American Legion and VFW until her passing in 2010. In 2015, Jim and his dog Annabelle moved to Cobb County to be closer to his children and grandchildren. He is preceded in death by his wife, Marilyn; sisters, Marjorie Bradford Hammet of Atlanta, Louise Clapp of Iowa Park, TX; brothers-in-law, R.A. “Bunk” Bradford, John W. Clapp Jr., Walter I. Biltz, H. Donald Cagle, C. Douglas Cagle and C. Willard Cagle. Left to cherish his memory are his children, Jim Jr. (Carol) and Steve (Sandra); granddaughters, Ashley Thompson (Josh) of Marietta, Catherine Armstrong of Cambridge, MA, Courtney Boren (John) of Smyrna and Jennifer Armstrong of Stamford, CT; great-grand-daughter, Mia Thompson; sister, Henrietta Biltz of Conyers; brother-in-law, Lamar Cagle (Barbara) of McDonough; many nieces and nephews. The family will receive visitors on Friday, July 20, from 4 until 7 p.m. at Scot Ward Funeral Services, 699 American Legion Rd., Conyers, GA. A Memorial Service will be held at Sandy Springs Christian Church, 301 Johnson Ferry Road., Sandy Springs, GA on Saturday, July 21, at 2:00 p.m. with the Reverend Dr. Nathan Brown presiding. Interment will be at the Georgia National Veterans Cemetery in Canton, GA on Monday, July 23, at 11:00 a.m. In lieu of flowers, the family invites contributions to the Alzheimer’s Foundation of America https://alzfdn.org or the Fisher Center for Alzheimer’s Research Foundation https://www.alzinfo.org. Condolences may be submitted on-line at www.scotward.com. Scot Ward Funeral Services, 699 American Legion Road, Conyers, GA 30012, 770-483-7216.

James Edward Armstrong, Sr., age 97, passed away on July 13, 2018 in Marietta, Georgia. He was admired by all who knew him and cherished by his family. Jim, as he was known by many, was born in Nelson, Georgia to the late Luther and Myrtle... View Obituary & Service Information

The family of James Edward Armstrong, Sr. created this Life Tributes page to make it easy to share your memories.