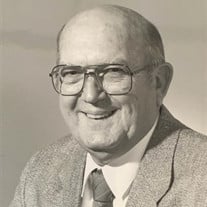 HILL, Jim Jimmie 'Jim' Charles Hill, age 89, of Conyers, Georgia, passed away peacefully on Sept. 25, 2019. Born in Hoschton, Georgia, on August 4, 1930, he spent his early childhood years in Winder, Georgia. After a few years of the family living in various cities along the East Coast, they eventually settled in Atlanta, in 1945. Jim attended Boys High, before graduating from Grady High School in 1947. After graduation, Jim began working for Southern Railway - where his father, Charles Hill, had worked for many years. Always a hard worker, Jim was quick to rise at Southern Railway; starting as a general laborer then promoting to a lineman position, ultimately he was entrusted to train other people how to be linemen as well. In 1950, he stepped up to serve his country during the Korean War, as an airman in United States Air Force. After serving in the USAF, Jim went back to work at Southern Railways, but in 1956 he began working at Delta Airlines. Over the course of his 35-year career at Delta, he went from an apprentice - aiding in the maintenance and repair of propeller engines - to a foreman that oversaw the engine shop�s evolution into the modern jet age. Jim, an ardent and lifelong lover of baseball, played in the Atlanta Baseball League from 1946 until 1956. After deciding to hang up his cleats, Jim took on the role as a mentor in his community. He coached Babe Ruth Little League in Hapeville, Georgia, was a volunteer police officer in Hapeville, a volunteer firefighter in Red Oak and assisted in various community projects in Rockdale County. After his retirement in 1992, Jim spent much of his time doing what he loved: watching baseball, hunting, fishing, studying history, reading and spending time with family and friends. He was also a longtime member of the Hapeville Masonic Lodge Number 590. A lover of truth, transparency and forthrightness, Jim placed enormous value on his love of God, love of family, friendships, environmental stewardship and living altruistically. His wit, effusive generosity, unvarnished advice offerings and love had a profound and lasting impact on the people in his orbit. He was a force of nature that reshaped the landscape around him; to say that he�ll be missed is a gross misstatement of words. He is survived by his beloved wife of 69 years, Dorothy (Castleberry) Hill; two daughters, Angela Hill of Blue Ridge, Georgia and Sandra (Felton) Sandling of St. Simons Island, Georgia; two grandchildren, Alan Raymond of Huntsville, Alabama and Alyson (Jay) Parker of Woodstock, Georgia; two great-grandchildren, Samantha and Jackson Parker; and many cousins. Funeral Services will be held Saturday, September 28, 2019 at 4:00 p.m. at Scot Ward's Green Meadow Chapel with officiating; interment will follow at Green Meadow Memorial Gardens. Family will receive friends from 3 until 4 p.m. prior to the service at the funeral home. The family would also like to extend a heartfelt thank you and deepest gratitude to the staff at the Oaks at Ashton Hills in Covington, GA and Abbey Hospice in Social Circle, Georgia, for their loving, compassionate and dignified care of Jim, during his final months. In lieu of flowers, donation may be made to the Masonic Home of Georgia, Grand Lodge Secretary, P.O. Box 4665, Macon, GA 31208. Condolences may be submitted on-line at www.scotward.com. Scot Ward Funeral Services, 699 American Legion Rd., Conyers, GA, 770-483-7216.

The family of Jim Hill created this Life Tributes page to make it easy to share your memories.

Send flowers to the Hill family.