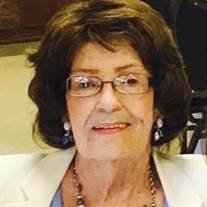 Joan A. Golden, 84, of Conyers, Georgia, passed away August 22, 2019 after a brief illness with her family by her side. She was born to Robert and Margaret Ferguson, February 25, 1935 in Scranton, Pennsylvania. Joan graduated from South Catholic High School, Scranton, PA, in 1953. She was married to the late Richard. F. Golden, Sr. in 1961 and they lived near Philadelphia for several years before relocating to Laurel, Maryland in 1966. In 1976, they moved to Conyers, Georgia making it their home for 43 years. While Joan held various jobs in her life, she will best be remembered as a homemaker. Joan was a member of St. Pius X Catholic Church in Conyers, GA. Joan is survived by her four children, son, Chris Golden & Becky Anderson of Oxford, Georgia, son, Tom & Sharon Golden of Bishop, Georgia, son, Richie & Dana Golden of Conyers, Georgia, daughter Maggie & Russel Folmar of Cedarburg, Wisconsin. She is also survived by grandchildren; Jennifer Golden, Katie Golden, Christal & Andy Eade, Lauren & Bryan Ashmore, Abigail Golden, Riley Folmar, Sean Folmar, Charleston Folmar, Ashlee & Chase Bagwell, and Aubree Anderson, and great grandchildren; Conner Eade, Hayden Eade, Andee Bagwell, and Averee Bagwell; and sister, Theresa Hartman. Joan was predeceased by her loving husband, Richard Golden in 1994. Joan was a devoted wife and mother. She was immensely proud of her children and their families and took an active role in the lives of her grandchildren. Joan's quick wit and fiery spirit will be remembered by all who were lucky enough to share a laugh with her. Joan was also very opinionated and quick to point out where others were 'wrong'! But she also possessed an innate sense of honesty that everyone appreciated. It was dangerous to ask her what she was thinking but one always got the unvarnished and uncensored truth! At the same time, Joan was very kind and loving. She welcomed our friends into her home and treated them as if they were her own children and they loved her as well. Joan always had a couple of gallons of milk on hand, a fresh baked cake, Oreo cookies, or her famous ham and cheese sandwiches! No one ever left hungry! She always put the needs of others above her own and made significant sacrifices throughout her entire life to make our lives better. Joan will be missed by many. Funeral Mass will be held Monday, August 26, 2019 at 11:00 a.m. at St. Pius X Catholic Church; interment will follow at Green Meadow Memorial Gardens. Family will receive friends Sunday, August 25, 2019 from 5 until 7 p.m. at the funeral home. Condolences may be submitted on-line at www.scotward.com. Scot Ward Funeral Services, 699 American Legion Rd., Conyers, GA, 770-483-7216.

Joan A. Golden, 84, of Conyers, Georgia, passed away August 22, 2019 after a brief illness with her family by her side. She was born to Robert and Margaret Ferguson, February 25, 1935 in Scranton, Pennsylvania. Joan graduated from South Catholic... View Obituary & Service Information

The family of Joan Alice Golden created this Life Tributes page to make it easy to share your memories.

Send flowers to the Golden family.