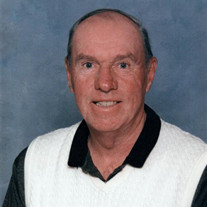 John Joseph Dwyer (Jack) 85 of Conyers passed away Wednesday, April 29, 2020 at Piedmont Rockdale Hospital. Born in Brooklyn, New York, Jack was a son of the late Thomas A. Dwyer and Margaret Mary Benedict Dwyer. He was preceded in death by his brother, Thomas W. Dwyer, brother, Michael B. Dwyer, two great-grandchildren, Tate William and Brinkley Fayn Kirby and his beautiful wife of 43 years, Katherine Ann Dwyer (Kathy). Jack was a 1957 graduate of St. Michael's College. Soon after graduation he married the love of his life Kathy Lunny. This beautiful union also brought into the world seven children. Jack had a lifelong career with Western Electric and retired as Department Chief with AT&T. Jack and Kathy were members of St. Pius X Catholic Church. He will be remembered as a kind and gentle man, a friend to all who knew him, a die-hard athlete who loved golf and basketball. If he could still play, he would have been shooting hoops every night. Jack used his love for his wife, his love of golf plus all the talents and gifts of his large and supportive family to establish the JDGT (Jack Dwyer Golf Tournament), and raised more than $165,000 for the Georgia Cancer Foundation. Over the years, golf has been his way to connect with friends and family. He will be remembered for his resilience and thoughtfulness in the way he cared for his family, friends and extended family, his golf buddies. He is survived by his children, Susan (Kevin) Kirby of Greenwood, SC, John (Kris) Dwyer of Atlanta, Patty (Stan) Stokes of Suwanee, Terry (Jan) Dwyer of Monroe, Nancy (Kelly) Holtz of Loganville, Tim (Carolyn) Dwyer of Atlanta, Kathy (Ralph) Pickett of Grayson. In addition he is survived by 13 grandchildren and 15 great-grandchildren, a sister Jane Dwyer Myers of California and his brother Kevin Dwyer of Maryland and numerous nieces, nephews, great-nieces and great-nephews. A private graveside service will be held at 2:00 p.m. Sunday, May 3. There will be a Celebration of Jack's Life for all to attend as soon as it can be safely done. Notification for this Celebration will be by social media and newspaper. The family would like to express true hearts of gratitude to the ICU doctors and nurses of Piedmont Rockdale Hospital for their extraordinary care for Jack this unprecedented time. The family suggests that memorial contributions may be made to your local Food Bank or The First-Tee of Atlanta. Condolences may be submitted on-line at www.scotward.com. Scot Ward Funeral Services, 699 American Legion Road, Conyers, GA 30012, 770-483-7216.

John Joseph Dwyer (Jack) 85 of Conyers passed away Wednesday, April 29, 2020 at Piedmont Rockdale Hospital. Born in Brooklyn, New York, Jack was a son of the late Thomas A. Dwyer and Margaret Mary Benedict Dwyer. He was preceded in death by... View Obituary & Service Information

The family of John Joseph Dwyer created this Life Tributes page to make it easy to share your memories.

Send flowers to the Dwyer family.