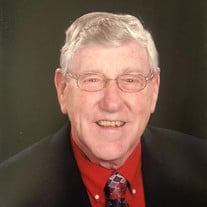 Mr. Johnnie Russell Childs, age 80 of Conyers, died Saturday, August 25, 2018. He was born November 21, 1937 in Hart County, Georgia to the late Berry & Lena McConnell Childs. In 1957, he moved to the Atlanta area, and began his lifelong career in the heating and air business. For 30 years he worked at Estes Heating & Air. Then in 1987 he started his own business, Colonial Heating & Air in Conyers, Georgia, which he owned and operated until his passing. His passion was family, tractors, and his heating and air business. He was a very loyal member of Rockdale Baptist Church, where he held various leadership positions including working in the preschool area for over 25 years. Johnnie had a servant�s heart, never missed an opportunity to lend a helping hand, and was loved by all. He was preceded in death by his brothers and sisters-in-law, Douglas and Betty Childs and Lamar and Mary Childs; his in-laws, Otis and Pauline Skelton; brother-in-law and sister-in-law, George and Camilla Mize. He is survived by his loving wife, of 59 years on August 30th, Linda Skelton Childs; daughter and son-in-law, Angela and Clay Turley; grandson and granddaughter-in-law, Claywell and Aubrey Turley all of Covington. His siblings, Calvin Childs (Frances) of Royston, Nellie Jones (Kendall) of Shelby, NC, and Hershel Childs (Elaine) of McDonough. His wife�s siblings who were like his own, Wayne Skelton (Doris) of Hartwell, Carol Pilgrim (William) of Royston, and Randy Skelton (Dell) of Hartwell. He also had many nieces and nephews. Homegoing Celebration will be held Wednesday, August 29, 2018 at 2:00 p.m. at Rockdale Baptist Church; he will lie in state at 1:00pm until the service starts; Interment will follow at Green Meadow Memorial Gardens. The family will receive family and friends Tuesday, August 28, 2018 from 5 p.m. until 8 p.m. at Scot Ward Funeral Home in Conyers. In lieu of flowers, donations may be made to Rockdale Baptist Church 1295 Smyrna Road, Conyers, GA 30094. Condolences may be submitted on-line at www.scotward.com. Scot Ward Funeral Services, 699 American Legion Rd., Conyers, GA, 770-483-7216.

The family of Johnnie Russell Childs created this Life Tributes page to make it easy to share your memories.

Send flowers to the Childs family.