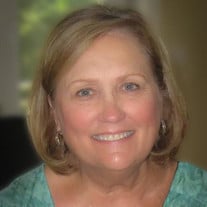 Due to the recent threat of COVID-19.The visitation and funeral for Judy Walker Smith is being cancelled. For now, the family will have a private graveside funeral, but will plan a celebration of life for some date in the future. The family would like to express their heartfelt gratitude for all of the love and support they have received from the community that Judy so loved. Their prayers are for the health and well-being of everyone and apologize for any inconvenience this may have caused. Judy Elaine Walker Smith passed away peacefully on Saturday, March 14th. She was born on September 18, 1945 in Conyers, Georgia, where she lived until her death. She was an active lifelong member of First Baptist Church of Conyers where she served on the personnel, finance, and pastor search committees. She also taught various Sunday School classes to children, singles, college and career, and young married couples and was a member of the hand bell and sanctuary choir. She was involved in her community as a member of the Rockdale Jaycettes where she served as president and was a pageant director for the Miss Rockdale/Junior Miss pageant. She also volunteered her time coaching her children's soccer teams at Rockdale Youth Soccer Association as well as serving as a member of the Rockdale Civic League. Judy worked for thirteen years at Westbury Nursing Home, later Starcrest of Conyers, where she earned her Nursing Home Administrator's license and served as administrator. In 1990, Judy was recruited to become the practice administrator to help start Internal Medicine Associates of Rockdale, which grew to two facilities and twelve physicians. She was preceded in death by her parents, the late state representative Eli M. Walker and Agnes Owens Walker, her brother Jimmy Franklin Walker, and her beloved sister Zan Walker Cowan. She is survived by her loving husband of fifty-five years, Jessie Ronald Smith, and their three children: Tracy Elizabeth Young (Paul), Brent Ronald Smith (Mari), and Leigh Zan Wach (Keith). She is also survived by seven grand-children: Jacob Young (Courtney), Jordan Young Thorne (Michael), Brennen Young, Walker Smith, Madison Wach, Sara Alden Smith, and Landon Wach, and two great grandchildren: Declan Young and Olivia Thorne. In lieu of flowers, the family asks for contributions be made to First Baptist Church of Conyers or the ALS Association of Georgia in her memory.

Due to the recent threat of COVID-19.The visitation and funeral for Judy Walker Smith is being cancelled. For now, the family will have a private graveside funeral, but will plan a celebration of life for some date in the future. The family... View Obituary & Service Information

The family of Judy Walker Smith created this Life Tributes page to make it easy to share your memories.

Due to the recent threat of COVID-19.The visitation and funeral...

Send flowers to the Smith family.