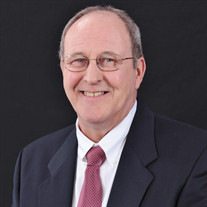 Lawrence 'Larry' Zachary DeFloria, age 65 of Conyers, GA, passed away with his wife and family by his side on Tuesday, April 6, 2021 after a courageous battle with lung cancer. Larry was preceded in death by his parents, John B. and Theresa Christine (Welling) DeFloria; and sister and brother-in-law, Mary C and Richard Davis. He is survived by his loving wife of 25 years, Elizabeth (Bloise) DeFloria, two daughters, Maria N. (Jason) Bush and Stephanie M. (Tyler) Austin, and three grandchildren, Anthony J, Brandon J, and Isabella R. Bush. He is also survived by his siblings, Cynthia A (Michael) Marcej, John J. (Marjory) DeFloria, Terry L DeFloria (Laurie Parenti), and Paul T (Michele) DeFloria, as well as his Uncle Bert DeFloria and Aunt Dorothy DeFloria and nieces and nephews; Richard R (Lori) Davis, Vincent J.E (Donna) Davis, Dawn M (Nathan) Paterra, Brian M DeFloria, Tiffany L Marcej, Renee N DeFloria, Monica F DeFloria, Michael J Marcej, II, and Mary F DeFloria. Larry was a hard worker and worked for the State of Georgia Department of Corrections at Georgia Correctional Industries for 30 years. He was a member at St. Pius X Catholic Church, in Conyers GA. In his spare time, Larry loved traveling to Pennsylvania to visit family and friends, especially his three grandchildren and his uncle Bert. He enjoyed working on various home improvements and mowing grass with his brother, John. Larry was an athlete and loved playing football and softball. He was an umpire for several leagues and won an award for umpire of the year in 2011. Larry was the biggest fan of his son-in-law Tyler, and loved watching him play baseball. He enjoyed every moment spent with his beloved dogs: Bobo, Jack, Crystal, Brady, Samson, Jessie, Remy and Cookie. Larry was a friend to everyone and will be dearly missed by so many. Funeral services will be held on Thursday, April 8, 2021 at 7:00pm at Scot Ward's Green Meadow Chapel with Deacon Fred Johns as celebrant. The family will receive friends from 5:00pm-7:00pm prior to the service at the funeral home. In lieu of flowers donations may be made to Noah's Ark, 712 L G Griffin Road, Locust Grove, GA 30248 www.noahs-ark.org. Condolences may be submitted on-line at www.scotward.com. Scot Ward Funeral Services, 699 American Legion Road, Conyers, GA 770-483-7216. Funeral service for Mr. DeFloria will be live streamed from the funeral home here on the Scot Ward website, please check back at the time of the service to see it live.

Lawrence 'Larry' Zachary DeFloria, age 65 of Conyers, GA, passed away with his wife and family by his side on Tuesday, April 6, 2021 after a courageous battle with lung cancer. Larry was preceded in death by his parents, John B. and Theresa... View Obituary & Service Information

The family of Lawrence 'Larry' Zachary DeFloria created this Life Tributes page to make it easy to share your memories.

Send flowers to the DeFloria family.