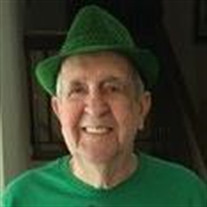 Due to the Covid-19 Pandemic, the family asks that all those planning to attend the visitation and/or funeral wear a mask. Lawrence Hartwell Whisenand, Sr., age 90 of Conyers, died Friday, August 13, 2021. He is preceded in death by his parents, Henry and Dena Whisenand; sisters, Eloise, Lelia, Jewel; brothers, Dee, Hank, Bob. He is survived by his devoted wife of 44 years, Donna Whisenand; daughters and sons-in-law, Leah Whisenand (Cameron Smith), Lani Roberts (Dave); son and daughter-in-law, Larry Whisenand, Jr. (Jodie); granddaughter, Marie Eller (Corey); great-granddaughters, Jacqueline Morris (Callon), London Young; great-great-grandsons, Liam Young, Lincoln Morris, Lucas Morris, as well as numerous nieces and nephews. Larry was born on October 24, 1930 in Sublette, Illinois but raised in Dixon, Illinois. He joined the Marines in 1948 and retired in 1971. Larry served in Korea during the Korean War from 1951-1952. He was stationed all around the world including several duty stations, one of which was Japan (multiple times) and another in Hawaii. Larry joined the USMC Boxing Team where he took the title of All Hawaiian Champ two years in a row and Runner-up his third of year competing. While in Hawaii, Larry and several others purchased a Piper Cub plane and took flying lessons but before he could complete his final test (Solo Cross Country) to get his Pilot's license, was transferred back to the states. Larry spent his last 10 years of Military service in Millington, TN teaching electronics before retiring in 1971. Once retiring from the Military, he entered the medical field service traveling throughout the United States servicing Anesthesia and Respiratory Equipment. In 1984 he began working at Rockdale Hospital as a Bio-Medical Engineer. Larry enjoyed many things throughout his adventurous life, but more specifically, riding his Harley, golf, bowling, dancing, traveling, cooking and working with Toys for Tots. The family will receive friends Wednesday, August 18, 2021 from 1:00 PM to 2:00 PM at the church. Funeral services will be held Wednesday, August 18, 2021 at 2:00 PM at Ebenezer United Methodist Church with Rev. Dr. Shelia Crowe-Hinchee and United States Ret. Marine SgtMaj Steven Teague officiating; interment will follow at Ebenezer United Methodist Cemetery. In lieu of flowers, those desiring to do so, may make a donation to Toys for Tots, www.toysfortots.org/donate. Condolences may be submitted on-line at www.scotward.com. Scot Ward Funeral Services, 699 American Legion Rd., Conyers, GA, 770-483-7216.

Due to the Covid-19 Pandemic, the family asks that all those planning to attend the visitation and/or funeral wear a mask. Lawrence Hartwell Whisenand, Sr., age 90 of Conyers, died Friday, August 13, 2021. He is preceded in death by his parents,... View Obituary & Service Information

The family of Lawrence Hartwell Whisenand, Sr. created this Life Tributes page to make it easy to share your memories.

Due to the Covid-19 Pandemic, the family asks that all those...