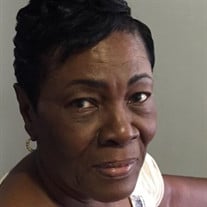 Loretta Bailey was born on the beautiful island of Jamaica West Indies in the district of Nine Turns in the parish of Clarendon. She met the love of her life Chevance Bailey and they were married in April 1972. Seeking to further her career as a registered nurse she migrated to the United States in 1989. Her husband and children later followed and the family lived in Queens NY. Loretta dedicated over 35 years of her life to the noble profession of nursing and worked as a registered nurse at Mount Sinai of Queens Hospital and also served as a school nurse for some years before retiring in August of 2009. She was a devout Christian, a virtuous wife, a devoted mother, an awesome sister, the best grandmother, an admired cousin and just an all-around wonderful family member and friend to so many. After several visits to the Peach state following her retirement she decided to make Georgia her home. She was an exceptional woman who exemplified God's love as was shown to her children, to those she mentored and even to total strangers. As a nurse she performed her demanding duties with willingness and with compassion. She practiced and taught those around her to care for others in a manner that would show they truly cared and we're not just doing a job. She was respected and admired by her colleagues and she was greatly appreciated by the patients she took care of. Loretta spent her whole life helping others. She was always there for those in need whether they needed to take shelter in her home during a difficult time or simply wanted an ear that would listen without judging, condemning or prejudging. She was a reassuring presence for her husband, her children, her friends, her work colleagues and her entire family. She was well known and admired, was authentic, humble, generous, and filled with integrity. She was an all-around well-grounded individual. She loved watching movies, baseball and basketball. She enjoyed going to Bible studies and church services she was always willing to give just a little more of herself than was required and she was willing to sacrifice everything so that her family would lack nothing. Her family will quickly let you know that not only was she a great cook but she was an even better baker. Christmases, birthdays and holidays were made extra special with her famous fruitcakes. In the words of one of her children if you want to experience something heavenly then you needed to try a piece of her delicious fruitcake. On Tuesday, October 5, 2021 our mother, our queen, our angel, was called to rest. Take your rest mother, sleep in peace with the assurance that you will never be forgotten...you will remain in our hearts forever. Funeral Services will be held Saturday, October 23, 2021 at 1 p.m. with Rev. Nolan Jackson, Sr. officiating; interment will follow at Green Meadow Memorial Gardens. Family will receive friends Friday, October 22, 2021 from 2 until 5 p.m. at the funeral home. Condolences may be submitted on-line at www.scotward.com. Scot Ward Funeral Services, 699 American Legion Road, Conyers, GA 30012, 770-483-7216.

Loretta Bailey was born on the beautiful island of Jamaica West Indies in the district of Nine Turns in the parish of Clarendon. She met the love of her life Chevance Bailey and they were married in April 1972. Seeking to further her career... View Obituary & Service Information

The family of Loretta Bailey created this Life Tributes page to make it easy to share your memories.

Loretta Bailey was born on the beautiful island of Jamaica West...

Customized sympathy cards. Mailed for you.