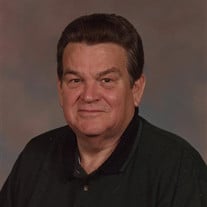 Marius 'Mat' Turner, Sr., age 82 of Conyers, GA, died Wednesday, July 10, 2019. He is survived by his wife of 63 years, Ann Armstrong Turner; son and daughter-in-law, Mat Turner, Jr. and Terry Turner of Savannah, GA; daughter and son-in-law, Linda Turner Sikes and Steve Sikes of Covington, GA; son and daughter-in-law, Michael Turner and Sherry Ashley Turner of Savannah, GA; grandchildren, Noel Sikes, Amanda Sikes Kennedy (Terry), Ashley Turner Fischer (Eddie), Blake Turner (Lauren), and Michael Turner, Jr.; great-grandchildren, Janelle Sikes, Natalie Sikes, Serafina Kennedy, and Francis Kennedy; and special friend of the family, River Triguerro. Born in Atlanta, GA in 1937, Mat graduated from Savannah High School in Savannah, GA in 1956. He was employed by the Southland Oil Company in Savannah, GA from 1956-1963. He served in the Naval Reserves in March 1954 and was called to active duty during the Berlin Crisis in 1961 and 1962. Upon returning home, he was employed by Hercules, Inc. in Savannah, GA, from 1963-1985. He was then employed by Solar Chemicals, Inc. based in Acworth, GA from 1986-1990. An avid entrepreneur, Mat founded MATCO Supply, Inc which he ran from 1990-2000 until retiring and moving to Conyers, GA to be near his daughter. Mat Turner became an active member of Ebenezer United Methodist Church in 2001, where he was Chairman of the Trustees for 6 years and also led the annual yard sale for many years. He became a member of Shiloh United Methodist Church in Covington, GA in 2017. He served on the Board of Equalization from 2006 to 2018 in Covington, GA. His favorite pastimes were saltwater fishing, hunting, and woodworking. A Memorial Service will be held Saturday July 13, 2019 at 2:00 p.m. at Shiloh United Methodist Church in Covington. Having been long-time residents of Savannah Georgia, there will be a Graveside Service in Savannah, Georgia at 12 noon on Monday, July 15, 2019 at the Forest Lawn Cemetery. In lieu of flowers the family has asked to please make donations to Shiloh United Methodist Church located at 10 Almon Church Road, Covington, GA 30014 or Ebenezer United Methodist Church located at 2533 Stanton Rd SE, Conyers, GA 30094. Condolences may be submitted on-line at www.scotward.com Scot Ward Funeral Services, Conyers, GA, 770.483.7216.

The family of Marius 'Mat' Archie Turner, Sr. created this Life Tributes page to make it easy to share your memories.