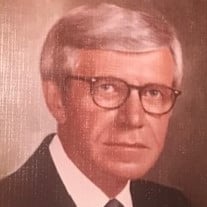 Marshall Hogan Ivey, age 99, passed away on February 20. He was residing at The Retreat at Conyers, formerly Remington House. He and his wife, Mary, were the first to move into Remington House when it was built. They were 80 years old and moved into Independent Living. A few years ago, he had to move to Assisted Living, then this year to Memory Care. Mr. Ivey was preceded in death by his wife of 77 years, Mary Grogan Ivey; his son, Marshall Hogan Ivey, II; parents, Ira and Maude Wright Ivey; brothers, Broughton (Frances), and Thomas; sisters, Bernice Minter (Byron), and Margaret Glass (George). He is survived by his daughter, Emily Eckerle (Robert); granddaughter, Tara Burns (Knox); great granddaughter, Ansley Burns; daughter-in-law, Judy Lamb Ivey; grandson, M. Brian Ivey (Michelle); great grandsons, Jared and Justin Ivey; great-great-grandsons, Noah and Elijah; granddaughter, Kerry Klima (Shane); great-grandson, Jackson. Hogan was born and raised in Conyers. He was a retired Executive Vice President and Director of the SunTrust Bank in Conyers, with 50 years' service, all in Rockdale County. He was a former chairman and member of the Conyers Housing Authority for 35 years. He was a member of the Hospital Authority during the original construction of the Rockdale Hospital building. He was a former Trustee of Tift College. He was most proud of being a combat veteran of World War II. He served in Germany and Czechoslovakia with the 8th Armored Division 80th Tank Battalion. He was a member of the First Baptist Church of Conyers for more than 70 years, where he served as Chairman of the Board of Deacons, was a Sunday School teacher and was chairman of the Building Committee during the construction of the church building on Main Street, now owned and occupied by Rockdale County Government. In his later years he was a member of Heritage Hills Baptist Church. Because of COVID 19, a private service for the immediate family will be held at the Mausoleum at Scot Ward Funeral Services. In lieu of flowers, please give a contribution to your favorite charity. Condolences may be submitted on-line at www.scotward.com. Scot Ward Funeral Services, 699 American Legion Road, Conyers, GA 30012, 770-483-7216.

Marshall Hogan Ivey, age 99, passed away on February 20. He was residing at The Retreat at Conyers, formerly Remington House. He and his wife, Mary, were the first to move into Remington House when it was built. They were 80 years old and moved... View Obituary & Service Information

The family of Hogan Ivey created this Life Tributes page to make it easy to share your memories.

Send flowers to the Ivey family.