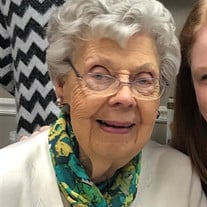 Mary Sybil Knox, age 98 of Conyers, died Friday, April 23, 2021. She was preceded in death by her parents, Roy and Eva Garner; husband, William Benjamin Knox; son, Robert Charles Knox; daughter, Cynthia Barr. She is survived by her daughter and son-in-law, Linda and Wesley Cobb; son-in-law, Walt Barr; daughter and partner, Kathy Knox and Susan Hollows; sister-in-law, Patricia Knox; grandchildren, Scott Cobb (Jennifer), Tamara Haase (Tim), Jason Barr (Brandi), Brandon Barr (Rebeka), Jake Knox (Caitlin), Aaron Knox; great-grandchildren, Kaitlin Kennett (Clay), Krista Carr (Ryan), Kyle Cobb, Katherine Haase, Ben Haase; great-great-grandchildren, Hazel Kennett, Macy Kennett. Sybil was born in Atlanta Ga., and moved next door to her, future, husband, Ben when she was 8 years old. She graduated from Girls High in 1941, and also married Ben in the same year; they were married for 65 wonderful years. Sybil accompanied Ben to numerous BBQ competitions in the South Eastern region of the US. In 1949, the two bought a one-bedroom cottage on Jackson lake. Over the years as their family grew, so did that cottage. As the children grew, so did the memories; digging holes, swimming, fishing, and so many precious moments. Sybil was a Blue-Ribbon holder in numerous areas, PTA president, but most of all, a great and great-great grandmother. After she and Ben retired, they spent a lot of time in St. Petersburg, FL., during the snowbird season at their condo. Sybil was a member of Salem United Methodist Church. She held various positions on boards in St. Petersburg as well as in Conyers. She enjoyed Arts and crafts, and most of all, traveling in she and Ben's motorhome to the Mid-West. Funeral services will be held Saturday, May 1, 2021 at 2:00 PM at Scot Ward's Green Meadow Chapel with Orrin Morris and Rev. Todd Hilton officiating. The family will receive friends Saturday, May 1, 2021 from 1:00 PM to 2:00 PM at the funeral home. Condolences may be submitted on-line at www.scotward.com. Scot Ward Funeral Services, 699 American Legion Rd., Conyers, GA, 770-483-7216.

The family of Sybil Knox created this Life Tributes page to make it easy to share your memories.

Send flowers to the Knox family.