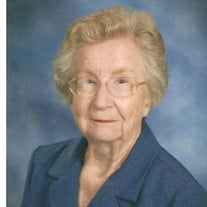 Mavis Olivent Wiggins, 96 passed peacefully Saturday January 23, 2021 at her home in Conyers, Georgia. Mavis was born the only daughter to Olga Thaddeus 'Odge' Olivent and Wilma Aline Freeman Olivent on October 5, 1924 in Bainbridge, Georgia. Her five brothers are Edgar 'Red' Olivent (deceased) and his wife Catherine of Faceville, GA., Reverend James Olivent and his wife Bernice (deceased) and second wife Jerelene (deceased) of Hannatown, GA., Francis Olivent (deceased) and his wife Polly of Lawrenceville, GA., Thad Olivent and his wife Jane, of Oviedo, FL, and William 'Preston' Olivent and his wife Carolyn of Georgetown, TX. At 17, after graduating from Faceville High School, Mavis left the family farm in Faceville, Georgia and moved to Atlanta where she worked as a nanny, housekeeper and cook for a Japanese family. Later, she worked in a similar capacity for a Jewish family. She met her husband, James, while serving as a greeter at Capital View Methodist Church in Atlanta. James and Mavis were married on November 23, 1949 and enjoyed 59 years together until his passing in April 2009. James and Mavis had three children: Wesley Wiggins and his wife Catherine (deceased) and second wife Carol of Hiram, GA., Charles Wiggins and his wife Sherry of Conyers, GA., and Mark Wiggins (deceased) and his wife Theresa of Willis, TX. Grandchildren include: Chris Wiggins (Julie), Patrick Wiggins (Kaleigh), Travis Wiggins, Carver Wiggins, Jill Stillwagon (Michael), and John Wiggins. Great grandchildren include Philomena Wiggins and Everly Wiggins. Mavis also had many nieces and nephews. Mavis served as Church Secretary at Asbury United Methodist Church in Decatur, GA., and later at Conyers First United Methodist Church. While at Conyers she typed the Doctoral Thesis for Reverend Nat Allen Long and later his autobiography 'My Long Life.' Mavis and James retired to Lake Oconee and enjoyed 13 years fishing and were very active at Walker United Methodist Church. Mavis had a servant's heart no matter where she lived. Having grown up on a farm and worked in the fields of corn, peanuts and cotton, she was not averse to hard work and it showed in her life service. She was as comfortable mowing grass as visiting homebound residents. She quilted approximately 100 quilts for others. She received honorary life time memberships in the United Methodist Women and the PTA. Her last stint as a volunteer was at the Rockdale Emergency Relief's food bank where she served for 14 years retiring at the age of 88. Her heart of service was Christ centered. She and James had a zest for life and enjoyed visits to the Holy Land, a trip to Alaska while serving at a summer youth camp and numerous bus trips with their traveling club. She most of all enjoyed spending time with her children and grandchildren. She loved playing Mexican Train with her friends. Visitation will be held at 1:00 pm on Saturday January 30, 2021 at Scot Ward Funeral Services followed by a graveside service at 2:00 pm at Green Meadow Memorial Gardens in Conyers with Rev. Dr. Dave Benson officiating, Georgia where she will be interred next to her husband. In lieu of flowers, donations may be made to the Conyers First United Methodist Church Hope Fund. Conyers First United Methodist Church. 921 North Main Street NW. Conyers, GA. 30012. Condolences may be submitted online at www.scotward.com, Scot Ward Funeral Services, 699 American Legion Rd., Conyers, Ga 30012.

The family of Mavis Isabelle Wiggins created this Life Tributes page to make it easy to share your memories.

Send flowers to the Wiggins family.