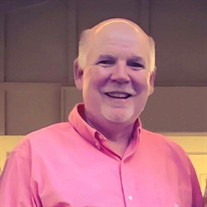 Michael Scott Waldrop. A husband, a father, a son. August 14, 1962 - June 6, 2021. He was, simply put, the foundational rock to his family. He was also the source of legal guidance for so many, including the thousands of friends he assisted throughout his 33 years of service as an attorney. He entered Heaven’s gates early Sunday morning, June 6, due to sudden health issues. Professionally, Mike was known in the legal community as the 'bulldog'. He fought tooth and nail for his clients with their best interests first and foremost. He was available to his clients both night and day, weekdays and weekends. It was not unusual for him to take client phone calls over weekends and holidays. To his family and friends, he was fiercely loyal. He was always available to help, tell a great joke, and have a good laugh. For years, Mike could be found coaching many different softball teams at differing competitive levels, from little league to A-Ball to Gold-Ball, to eventually watching Kat play Division 1 College Ball. Fast pitch was a sport he and his daughter, Kat, enjoyed for years together. This included time spent coaching, riding to tournaments, or just throwing the ball around. Throughout his daughter Caroline’s teen years, he worked tirelessly with the Heritage High School Patriot Players raising money for productions and running the ticketing booth, all while watching with great pride, Caroline perform on stage and screen. Whether sitting in a concert hall or theatre, or sitting in the stands at a softball tournament or coaching on the diamond, Mike took the most pleasure in life from being 100% involved with his two daughters. Most recently, he delighted in seeing and watching his two granddaughters: often remarking in amazement at how brilliant his Evie Rose was or how beautiful baby Clara was. He married the love of his life, the former Sarah Elizabeth Oglesby, in 1995. Sarah frequently referred to Mike as 'her knight in shining armor'. They enjoyed 26 beautiful years together, reared two intelligent, independent, and beautiful daughters, loved a multitude of fur babies dearly, and thoroughly enjoyed each moment the good Lord gave them together. Mike is survived by his wife, Sarah Oglesby Waldrop, of Bogart, his daughters, Caroline Zavislak, and her husband, Dr. Peter Zavislak, of Indiana and Katarina 'Kat' Waldrop of Buckhead, two granddaughters: Evelyn “Evie” Rose Zavislak and Clara Magdalena Zavislak, also of Indiana. He is also survived by his beloved mother, Brenda White Waldrop, and his mother-in-law, Joan Pittard Oglesby. Others include sisters and brothers (in-law): Jennifer and Gary Williams and Mike and Kim Oglesby, several nieces and nephews: Bailey and Brayden Williams, Emily (Matt) Knighton and Cary (Melody) Oglesby, several cousins, and a host of longtime friends many of which he considered family. He is pre-deceased by his father, Carlton Waldrop, and his father-in-law, Basil Oglesby. A special celebration of Mike’s incredible life is to be held at The Georgia International Horse Park, The Carriage Room, on Saturday, June 12 in Conyers, GA. Visitation with the family begins at 10:00 a.m. with a rather special and unique celebration ceremony of the 'Real Michael Waldrop” starting at 12:00 p.m. Light hors d’oeuvres will follow. The family is most grateful to the City of Conyers for their tremendous assistance in honoring Mike. Scot Ward Funeral Home is assisting with the care of his body. In lieu of flowers, please consider making a monetary donation in Mike’s memory to any of these three charities: The American Cancer Society, The American Humane Society, and Releash Atlanta. Condolences may be submitted on-line at www.scotward.com. Scot Ward Funeral Services, 699 American Legion Road, Conyers, GA 30012, 770-483-7216.

Michael Scott Waldrop. A husband, a father, a son. August 14, 1962 - June 6, 2021. He was, simply put, the foundational rock to his family. He was also the source of legal guidance for so many, including the thousands of friends he assisted... View Obituary & Service Information

The family of Michael Scott Waldrop created this Life Tributes page to make it easy to share your memories.

Send flowers to the Waldrop family.