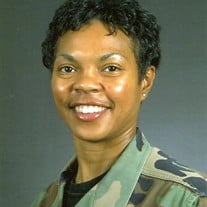 Perita Carole Alexander, 53, was born on May 17, 1964 in Saint Joseph, Missouri to Clarence Blount and Janet (Matthews) Blount. She gracefully transitioned in her sleep at Piedmont Hospital on Dec. 23, 2017 while surrounded by loved ones. Perita was known to many as �PC or Rette� a humble, hardworking, and generous soldier for the Lord. Perita thoroughly enjoyed her formative years in Saint Joseph. Upon graduating from Central High she enlisted in the United States Air Force where she honorably served until retirement. During her illustrious 30 year career she obtained a Bachelor of Science degree in Occupational Education and the highest enlisted rank; Chief Master Sergeant. She was awarded 5 Meritorious Service, 2 Joint Service Commendation and 3 Air Force Commendation medals for her exemplary service. Additionally, Perita was a member of World Changer Church International where she continued to serve. Perita was a loving and caring mother and mentor that was highly respected in the Conyers community and will be sorely missed. Preceding her in death is her father, Clarence Blount. Surviving family members are: her husband, Samuel Alexander; her son, Chia Antonio Cook and grandson, Christopher Jordan Cook; her mothers, Janet Matthews/Carole Madison and sister, Roshelle Sease, She also leaves behind aunts: Kae Mays, Lillie Richardson and Eloise Williams, uncles: Terry Blount and Arthur Hammond, and numerous nieces, nephews, cousins and friends. Funeral Services will be held Saturday, December 30, 2017 at 11 a.m. at Scot Ward's Green Meadow Chapel with pastor Michael Richardson officiating. Condolences may be submitted on-line at www.scotward.com. Scot Ward Funeral Services, 699 American Legion Rd., Conyers, GA, 770-483-7216.

Perita Carole Alexander, 53, was born on May 17, 1964 in Saint Joseph, Missouri to Clarence Blount and Janet (Matthews) Blount. She gracefully transitioned in her sleep at Piedmont Hospital on Dec. 23, 2017 while surrounded by loved ones. Perita... View Obituary & Service Information

The family of Perita Carole Alexander created this Life Tributes page to make it easy to share your memories.

Send flowers to the Alexander family.