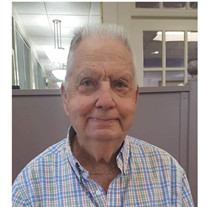 Bradford, Raymond Nolan, age 86, of Conyers passed away on Saturday, June 19, 2021. He was preceded in death by his loving wife, Virginia Smith Bradford; his parents, James and Belle Bradford; brothers, Charles and Bill Bradford; granddaughter, Elizabeth Dawn Gaylord. He is survived by his children, Judy (Billy) Ethridge of Locust Grove, Dawn (Tom) Gaylord of Wetumpka, Alabama, and Jeff (Linda) Bradford of Cumming; Grandchildren; Shelby (Matt) Panzenhagen, Ty Brownlee, Michael Gaylord, Matthew (Hannah) Gaylord, Mitchell Gaylord, Emily (Alex) Tostado, Libby (Alex) Barbosa, and Abby Bradford; sisters, Joan Hull and Linda (Jimmy) George. Raymond was born in Gwinnett County on November 26, 1934, and grew up in Milstead, Georgia. During his high school years, he attended Berry School in Rome, Georgia. After leaving Berry he enlisted in the United States Army where he spent his 2 years in Germany as a paratrooper. Raymond enrolled in the International Brotherhood of Electrical Workers (IBEW) apprenticeship program in Atlanta and began a life-long affiliation with Local Union 613. On December 19, 1959, he married the love of his life, Virginia. They recently celebrated their 61st wedding anniversary. During their retirement years they loved to travel or "rambling around" as they called it. He enjoyed classic cars, watching and participating in local dirt track and NASCAR series, and telling jokes. Most of all he loved Christ, his wife, his children, and especially his grandchildren. A visitation for family and friends will be at Scot Ward Funeral Home on Wednesday June 23, 2021 from 5:00 PM till 8:00 PM. A private burial service will be held separately. In lieu of flowers, donations may be made to Bethel Christian Church, 1930 Bethel Rd. NE, Conyers, Georgia 30012.

The family of Raymond Nolan Bradford created this Life Tributes page to make it easy to share your memories.

Bradford, Raymond Nolan, age 86, of Conyers passed away on Saturday,...

Send flowers to the Bradford family.