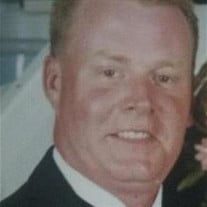 Richard Ashley Nash, 54, passed away peacefully on Tuesday, July 16, 2019. Richard was born on March 11, 1965 in Atlanta, Georgia to parents Gerald S. Nash, Sr. and Nina Madill-Nash. He attended Rockdale High School where he graduated in 1983. After high school he attended technical school on a golf scholarship in Cullman, AL. He opened his plumbing company, Nash Plumbing, in 1997. Richard enjoyed the outdoors, particularly hunting and fishing. He always found time to pass his love of the outdoors onto his daughter, Ansley. During his free time you could find Richard and Ansley fishing and enjoying each other's company. Throughout his life, Richard had a great love of golf, playing many of the finest courses with close friends and family. The same quiet and confident demeanor that led to his success in business ownership gave him an edge on the golf course. Richard is preceded in death by his father, Gerald S. Nash, Sr. He is survived by his wife, Jody Leigh Nash; their daughter, Ansley Mae Nash; his mother, Nina Madill-Nash; his sister, Suzy Casillo; his brother, Steve Nash, his nieces, Chelsea Coeburn, Kailee and Rebeka Casillo; his nephew, Hogan Lee Nash; his aunt, Carol Lee Lockey; and many cousins and extended family. Memorial Services will be held Friday, July 19, 2019 at 2 p.m. at Scot Ward's Green Meadow Chapel with Rev. Dr. Billy Moss officiating; the family will receive friends from 1 until 2 p.m. prior to the service at the funeral home. Condolences may be submitted on-line at www.scotward.com. Scot Ward Funeral Services, 699 American Legion Rd., Conyers, GA, 770-483-7216.

The family of Richard Ashley Nash created this Life Tributes page to make it easy to share your memories.

Send flowers to the Nash family.