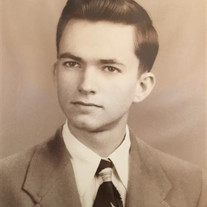 Robert 'Bob' Runner, age 89, passed away the morning of Wednesday, November 28, 2018 in the peaceful presence of his lovely wife, Jessie, taking his last breath on earth and his first breath in Heaven as he was embraced by his Father. His last writing talked about the failings of his body and mind, but ended with the words, 'I can do all things through Christ who gives me strength.' Bob's family, friends and co-workers describe him as putting family first, and he utilized his remarkable memory to frequently relive details of time spent with his family. Bob is survived by his wife of 59 years, Jessie (Cornn) Runner, who cared for him through his golden years, and by his wonderful children, Pam Gee and Scott Runner. He was preceded in death by his son, Bill 'Butch' Ashworth; brother, Cecil; sisters, Ruth and Evelyn; parents, Anna (Manning) Runner and Robert Cleveland Runner. His daughter, Pam (Gee) and husband Thomas Gee have twin children, Dwayne and Elaine, and grandchildren Destiny, Dalton, Karamie, and Lacey with her two children Gracie and Bubba, making Bob a great-great-grandfather. Butch, survived by his son, Jason, enjoyed fishing and the outdoors as much as Bob. Jason and his daughter, Ashley, live in Covington, Georgia. Bob loved spending time with Scott and his wife, Athena Runner, and their two sons Aidan and Ty on adventures in California in the Sierra snow, Monterey Bay, and San Diego beaches where Aidan surfed and watching Ty play baseball under the clear San Diego skies. Bob grew up in Bowling Green and Louisville, Kentucky after his dad died when he was 8. He graduated from Dupont Manual High School, and later attended the Universities of Louisville and Indiana. He served his country as Corporal in the 1st Armored Division, 'Old Ironsides' at Fort Hood, Texas from 1948-1952 during the Korean War conflict, and is a member of American Legion Post 232. After the Army, Bob started his 37 year career as a telephone pioneer with AT&T, where he worked in progressively greater roles. He was a noted expert on the technologies that transformed communications from analog into the digital world. His penultimate achievement was as an expert witness during deregulation of AT&T. Among his numerous awards and achievements, he was bestowed the AT&T Innovation Award. Passionate about sports, Bob became a part-time sportswriter for the Louisville Courier in 1960, covering the University of Louisville. A lifelong fan of the winning traditions of Kentucky and Louisville, he became an adopted fan of the Falcons, Braves and Georgia Tech when moving to Atlanta. Bob committed himself to volunteer activities including the United Way, Telephone Pioneers and school activities and sports teams. As the first president of the Parkview High School Boosters club, he helped finance and build the original stadium for the school that today is one of Georgia's finest high schools. Funeral Services will be held Saturday, December 8, 2018 at 3:00 p.m. at Scot Ward's Green Meadow Chapel with Rev. Jim Landis of Harmony Grove Methodist Church officiating and will include U.S. Army Military Honors; interment will follow at Green Meadow Memorial Gardens. Family will receive friends from 1 until 3 p.m. prior to the service at the funeral home. In lieu of flowers, donations may be made to the charity of your choice. Condolences may be submitted on-line at www.scotward.com. Scot Ward Funeral Services, 699 American Legion Rd., Conyers, GA, 770-483-7216.

Robert 'Bob' Runner, age 89, passed away the morning of Wednesday, November 28, 2018 in the peaceful presence of his lovely wife, Jessie, taking his last breath on earth and his first breath in Heaven as he was embraced by his Father. His last... View Obituary & Service Information

The family of Robert Runner created this Life Tributes page to make it easy to share your memories.

Send flowers to the Runner family.