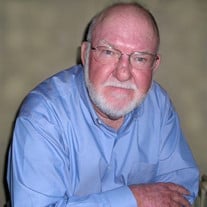 Roger Leigh Berger, age 77 of Conyers, passed on to be with our Lord and Savior Jesus Christ on Saturday, October 2, 2021 with his wife and her niece at his side. Roger was born in Pomona, CA on November 5, 1943. After a valiant fight, Roger, fully vaccinated, passed after contracting Covid. He was preceded in death by his parents; Herbert Max Berger and Mildred Nesbitt Berger. He is survived by his devoted wife of 30 years, Pamela Williams Berger; his sister and brother-in law, Colleen Berger Taylor (Buddy) Pomona, CA; brother, Ralph H. Berger, CA; two daughters and sons-in-law, Krista Berger Bjur (Kevin), Highland, CA; Lori Berger Clark (Randy), Jackson, MO; grandchildren, Taylor, Davis, Parker, Brittany and Brandon; niece and nephews Debbie Taylor Miller, Tom Taylor, and Eric Berger; great-grand child, Sunny. Roger had a long and successful career in the battery industry beginning in the late 1960's. Roger moved to Lithonia, GA in 1981 to build an electric golf cart battery manufacturing facility, owned by Alco Battery which was later purchased in 1988 by Trojan Battery, Santa Fe, CA. With Roger's leadership, Trojan Battery grew from $7 million to $60 million and he was promoted to Sr. VP of Operations. Most could retire happy at this point. However, in 2001 Roger went on to oversee the startup of a battery manufacturing facility in Puerto Rico; and as a pinnacle to an already successful career, he opened his own business, Processing Supply Co. in 2008 and became the sole distributor of seamless pasting belts for North America. He sold the business in 2016 and retired. Roger was an honest and sincere man full of joy and always ready for a good laugh and a joke. He was known for his sayings and quick wit. He loved fishing, which he called "minnow drowning." His next love was golf describing himself as "not that good," but enjoyed having fun playing with friends. He loved music, the classics, country music; and had a beautiful voice that he shared occasionally with others by singing a few tunes. He was loved by many. His wife, sister and children and his many lifelong friends will miss him so much, but all agree that his life was a life well lived. A Celebration of Life service will be held at Ebenezer UMC on Saturday, October 16 at 2:00 pm (Masks Requested). Service will be officiated by Reverend Doctor Sheila Crowe-Hinchee, and Reverend Jeanette Pinkston Jackson. Special music will be provided by Courtney Hulsey and Joseph Wiley. Friends are invited to visit with the family from 1:00 - 2:00 pm prior to the service. In lieu of flowers, donations may be made in his memory to Ebenezer United Methodist Church in Conyers, 2533 Stanton Rd. SE. Conyers, GA 30012; or charity of choice. Condolences may be submitted on-line at www.scotward.com. Scot Ward Funeral Services, 699 American Legion Rd., Conyers, GA, 770-483-7216

Roger Leigh Berger, age 77 of Conyers, passed on to be with our Lord and Savior Jesus Christ on Saturday, October 2, 2021 with his wife and her niece at his side. Roger was born in Pomona, CA on November 5, 1943. After a valiant fight, Roger,... View Obituary & Service Information

The family of Roger Berger created this Life Tributes page to make it easy to share your memories.

Roger Leigh Berger, age 77 of Conyers, passed on to be with our...

Send flowers to the Berger family.