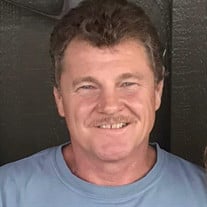 Ronald 'Ron' E. Lawrence, age 57 of Covington, died Monday, August 12, 2019. He was preceded in death by his parents, Elmer Lawrence and Faye Stewart. He is survived by his wife, Linda Lawrence; daughters and son-in-law, Shannon and Adam Richard,... View Obituary & Service Information

The family of Ronald E. Lawrence created this Life Tributes page to make it easy to share your memories.

Send flowers to the Lawrence family.