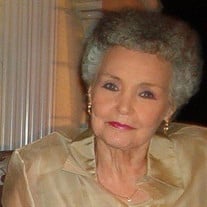 Rose Marian Bucy Poynter, 89, beloved wife and mother, ascended to heaven on angels’ wings on Wednesday, May 29, 2019 from the comfort of her home in Conyers, Georgia surrounded by her husband, children, grandchildren and great-grandchildren. Our hearts are heavy with our loss, but we know she shines above with the love and joy on which she graced this earth. Above all, she was devoted to God, her family, including her husband, children, grandchildren, great-grandchildren, parents, brothers, sisters, and many close friends. Marian leaves behind her husband, Ken; daughters, Sandy Harvill (Mark), Andrea McDaniel (Thorn), Candy McCullough (Alan); grandchildren, Shelley Allen, Michelle Thomas (Brady), Noelle Morgan (Brad), Randolph Poynter, Jr. (Casey), David Poynter (Elisha), Katherine McDaniel, Chris McDaniel, Brian Lunsford (Kristin), Brandon Lunsford (Lindsay), Brittany Rowe (Kenny), Brooke Wade (Cam), Brad McCullough (Melissa); great-grandchildren, Finley Allen, Avery Van Buren, Harper, Hayden, Collin Morgan, Riley, Grayson, Maren, Addison and Caleb Poynter, Jake, Abby, Kylie, Will and Owen Lunsford, Mackenzie Banks, Annistyn Patterson, Jackson Hamilton, Bryson and Beckham Wade, Alley and Wyatt McCullough, Gracie and Tucker Rowe; sisters, Helen Crady (Bill), Ginny Wells (Russ); brother, David Bucy (Frances), a host of nieces, nephews, grand-nieces and grand-nephews. Marian was preceded in death by her parents, Roy and Dollie Garrigus Bucy; her beloved son, Randy; daughter-in-law Libby Hudgins Poynter; brothers, Roy, John and Bobby Bucy, sisters, Thelma Todd (Bob), Edith Durham (Jimmy), Margaret Johannes (Fred), Mary Elizabeth and Janice Bucy. Marian was born on March 9, 1930, the sixth child of Roy and Dollie, in the small town of Terre Haute, Indiana. She always treasured the friendships made and the values she learned there for the rest of her life. She visited often after moving to Indianapolis, Indiana where she was a long-time member of Calvary EUB Church which was the center of her and her family’s lives. She graduated in 1947 from Arsenal Technical High School. Before and after school she was a newspaper carrier and was cited by the Indianapolis News as one of its “Best in All of the City”. At Arsenal, she and her friends founded the subdeb club they called TUGS : “To Use Good Sense” to encourage each other to maintain Christian values in their social lives. After graduation she became an active member of Beta Sigma Phi service sorority. Marian was also a member of the Ft. Harrison, Indiana Chapter of the Daughters of the American Revolution (DAR). She met the love of her life at the Indianapolis City Market when handsome, dark-haired 21-year-old Ken Poynter, fresh from the Air Force, walked in and spied her behind the counter at Sam Kips deli. He made a beeline for her and the rest is history. Ken and Marian married July 15, 1951 and would have celebrated their 68th anniversary this year. Four children soon followed. In 1962, the family moved to Lithonia, Georgia and two years later to nearby Conyers after her husband and his partners opened Miami Stone of the Southeast, Inc. Marian's life was busy with the upbringing of her four children and, as in Indiana, church was a central focus of her life. She was a longtime member of the choir at Conyers Presbyterian Church, a Girl Scout leader, and co-founded the Rockdale Chapter of Beta Sigma Phi. Her family was also heavily involved with local politics she was part of her husband's and their friends' successful effort to form the Rockdale Republican Party. Once her children reached middle school, Marian went back to work becoming an expert and very popular diamond saleswoman in the jewelry department at Ellman's and then Service Merchandise stores in Decatur, Georgia. In later years, the couple spent their winters in Tampa, Florida, but illness forced them to return full-time to Conyers in 2010. The family would like to express gratitude to the special people who cared for her during her illness, Belinda Wilkins, Shirley Hays, Patience Westbury, DeAnna Shavers, Elizabeth Antillon, Sylvia Deer, Stephanie Sanders and Darly Pierre and Rhonda Pope. A Memorial Service will be held Monday, June 3, 2019 at 12:00 p.m. at Scot Ward's Green Meadow Chapel with Rev. Kevin Hicks and Dr. Albert Myers officiating; a short prayer will follow at Green Meadow Memorial Gardens. Family will receive friends Monday, June 3, 2019 from 10:30 a.m. until 12 p.m. prior to the service at the funeral home. In Lieu of flowers, the family asks that you please consider making a donation to Marian's longtime place of worship, Conyers Presbyterian church, 911 N. Main Street, Conyers, GA 30012. Condolences may be submitted on-line at www.scotward.com. Scot Ward Funeral Services, 699 American Legion Rd., Conyers, GA, 770-483-7216.

Rose Marian Bucy Poynter, 89, beloved wife and mother, ascended to heaven on angels&#8217; wings on Wednesday, May 29, 2019 from the comfort of her home in Conyers, Georgia surrounded by her husband, children, grandchildren and great-grandchildren.... View Obituary & Service Information

The family of Marian Poynter created this Life Tributes page to make it easy to share your memories.

Send flowers to the Poynter family.