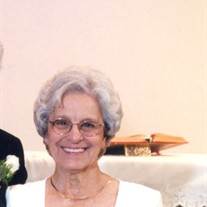 Mrs. Rosemarie Anne Zivic (nee Sestric), age 86 of Conyers, died Monday January 15, 2018. She was preceded in death by her husband, Richard F. 'Dick' Zivic; parents, George and Mary Sestric; brothers, George Sestric, Michael Sestric, Edward Sestric, William Sestric and Elmer Sestric; and sisters, Helen Trubic and Virginia Mae Francic. She is survived by her sons and daughter-in-laws, Rev. Richard A. Zivic, David and Patricia Zivic, Gregory and Michelle Zivic; daughters and son-in-laws, Kathleen and Dennis Carmel, Pamela and Everett Washburn, Rosanne Allenbaugh, Michele and W. David Freeman; brother and sister-in-law, Richard and Jane Sestric; sister, Patricia Sestric; sister-in-law, Marie Sestric; 17 grandchildren; 10 great-grandchildren; and many nieces and nephews. Family and Faith were the cornerstones of Rosemarie's life. She began playing the organ at the age of 14 at St. Nicholas Croatian Catholic Church in Pittsburgh, PA. After marrying, she and her husband lived in various cities throughout their lives. Finding a beautiful place to worship, raise their children and share their love of music was paramount. In every parish, her talent as an organist, pianist and vocalist were the beautiful gifts that she shared. Rosemarie also loved signing and traveling with the Covington Conyers Choral Guild. In 1989, Rosemarie and her husband were both honored by Pope John Paul II with the 'Benemerenti' medal for lifelong faithful service to the church. In addition, Rosemarie was named 2004 St. Pius X Woman of the year. What she loved most was being surrounded by her family. Funeral Mass will be held Friday, January 19, 2018 at 11 a.m. at St. Pius X Catholic Church with Monsignor John Walsh and Father John Kieran as Co-Celebrants; entombment will follow at Green Meadow Memorial Gardens Mausoleum. Family will receive friends Thursday January 18 from 1-4 p.m. and 6-9 p.m. at the funeral home. A Rosary service will be held at 8:30 p.m. Donations can be made to St. Jude Children's Research Hospital or to the Charity/ Church of your choice. Condolences may be submitted on-line at www.scotward.com. Scot Ward Funeral Services, 699 American Legion Rd., Conyers, GA, 770-483-7216.

The family of Rosemarie Anne Zivic created this Life Tributes page to make it easy to share your memories.

Send flowers to the Zivic family.