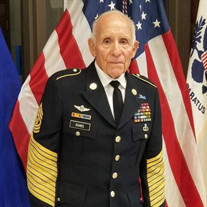 What does one say about such a man? He was the son of Antonio and Santos Ramos; born in Kerrville, Texas; one of 13 children; the husband to Emily Rodriquez; the father to his sons and daughter Raymond, Ronny, Richard, Randy, Robert, and Renee; Grandfather; Tio; a soldier who faithfully served his country for 35 years; a friend to so many who crossed his life path; a Catholic who diligently practiced his faith which kept him grounded through so many of life's tribulations; a student of life, and a mentor to all willing to listen. He was someone of very humble beginnings, who took the path less traveled. He and his brothers had to quit high school to support the family after his father died. In 1952, Simon joined the U.S. Army and almost immediately found himself in the heat of battle in Korea. Having fought in some of the fiercest battles, such as Pork Chop Hill with the 7th Infantry Division, and survived with minor wounds, he was then able to return 30 years later as the 2nd Infantry Division Command Sergeant Major to see the fruits of such battles. Simon did two tours in Vietnam, both times with the Army Special Forces. He and his family lived in such 'exotic' places as Ft. Bragg, Ft. Ord, Boerne, Panama, and more of Ft. Bragg (although there were a number of classified tours which were not discussed). During his career, he was highly decorated having received the Silver and Bronze Stars, Meritorious Service Medal (3 awards), Legion of Merit, Purple Heart (2 awards), Vietnam Gallantry Cross with Palm, Overseas Service Ribbon (3 awards), Korean War Service Medal, Vietnam Campaign Medal, Master Parachutist, and many others. Among the troops, he was known as 'Godfather' because he was so soft spoken, even when mad or irritated. He loved being of service to his troops and everything he did was to promote their success. He worked for Raymond, his son and the name of the company, for several years as an inspector. Although he was terrible with technology, you could not ask for a better person to deal with construction issues. He was able to develop a very strong rapport with the roofing crews and garnered their respect on and off the projects. He was a student of the work done at Raymond, but an excellent mentor to those who worked at Raymond. At times I feared his methodology in dealing with issues, but his ability to 'connect' with the foremen and superintendents always made the difference in the success of projects. We reluctantly let him retire again when he had to take care of Mom who was suffering from Parkinson's disease. But he was always a welcome addition at our company parties and when he dropped in at the offices. During such an illustrious military career, he married Emily, raised 6 kids, and saw to it that all had the opportunity to go to college; something that was not easily done on an enlisted man's salary, even if he did get jump pay. Simon and Emily were the perfect team in family matters. His duties took him around the world, and Emily handled the home front. Simon was the car, but it was Emily who did the driving, and she knew exactly how to steer him in matters involving the family. He truly loved her and was heartbroken when she passed. You could have no better friend than Simon. He had a way of striking up a conversation with just about anybody, and many a friendship grew out of such chance encounters. He mentored many up-and-coming NCOs who later became life-long friends. And many of his friends are family friends such as the Alvirez, Esparza, Hines, Baldwin, Edge, Galliher, and Walker, just to name a few. There were even plots among several of the families to get the kids to marry, but that did not happen; yet those 'kids' have become friends for life. Up until his very last days, we could hear him on the phone talking with friends and family. Simon was definitely an athlete. Want to join him for a run? Be careful what you ask for. Golf? He had a knack for it even though he did not start playing until after he retired and was shooting in the 80s with his friend Billy Boyd a year before his passing. Bowling? He and Mom were league bowlers and Simon once bowled a perfect 300. He was at his gym, Body Tech, during his final years working out or holding court with its members and staff. When growing up, we never really realized that we were breathing such rarefied air when in his presence, because he never put on airs. He is a man of God who devoted his spiritual life to the Catholic faith. After he retired, you could typically find him at church just about every day; said his prayers daily, and his final home with Ray and Margaret was a shrine to God and Jesus Christ. God put Simon on this Earth and tested him time and time again, but Simon was unyielding in his faith and continued to serve God and Jesus until his last day on this Earth, and in my opinion, earned a seat at God's table. Simon was the Leader of Our Band. He will be missed by all of us. Let us lift up his spirit and try to emulate his life. And when it is our time to face God, I can guarantee you that Heaven will be in much better shape with God's CSM at the helm. OooRah!! We will have a service to celebrate his life at St. Pius Catholic Church, Conyers, Georgia on July 17, 2020 at 11:00AM followed by a reception. Internment of his ashes will be at Scot Ward Funeral Home, Conyers, Georgia on July 18th. We will provide the time once final arrangements have been made.

What does one say about such a man? He was the son of Antonio and Santos Ramos; born in Kerrville, Texas; one of 13 children; the husband to Emily Rodriquez; the father to his sons and daughter Raymond, Ronny, Richard, Randy, Robert, and Renee;... View Obituary & Service Information

The family of Simon Ramos created this Life Tributes page to make it easy to share your memories.

What does one say about such a man?
He was the son of Antonio...

Send flowers to the Ramos family.