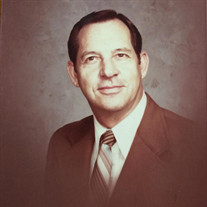 Thomas Stone Barnett (Tom), age 89 passed away at his home in Oxford, Georgia on February 13, 2021. He was preceded in death by his parents, Darline and Howard T. Barnett; sister Hilda Bradford; and brother, James H. Barnett. He is survived by his wife of 65 years, June S. Barnett; son and daughter- in-law, Scott and Leah Barnett and daughter, Tessa Barnett Melton; grandchildren Amber Melton; Andrea and husband, Kenneth Batchelor; William, Madeline and Sam Barnett. After graduating from Ila High School in Nicholson, Georgia, Tom attended Reinhardt Junior College. He then joined the U. S. Marine Corp and was assigned to the U. S. S. Oriskany during the Korean War. He received the Korean Service Medal w/2*; United Nations Service Medal; China Service Medal; and the National Defense Service Medal. To finish his education, Tom enrolled in the Atlanta Division of the University of Georgia. It was here in an accounting class that he met his wife, June. Tom was employed by the Coca-Cola Company in the Market Research Department where he had the opportunity to work on one of the first computers in the Southeast called RAMAC. He retired from Coca-Cola after having given 35 years of services. One of his dreams was to have a son, move to the country and build his own home. In 1965, Scott was born. In 1966, he bought 21 acres of land in Rockdale County and moved there. Two years later, he drew the plans for his dream house and built it with the help of June and her dad in 14 months while working full time at the Coca-Cola Company. In 1967, the family joined Conyers First United Methodist Church and in 1970, Tessa was born. Tom represented the church for a number of years as a delegate to the North Georgia Annual Conference of the Methodist Church. He served on the Official Board of the church and as its chairman for several terms. He loved other people and spent a lot of time in mission work serving until his death on the Mission Committee. He headed up the Honduras Mission Team for many years and also went as a team member. He was a member of the Chancel Choir from 1967 until his vision prevented him from reading the music several years ago. He also sang with a special music group called Gabriel’s Sound. It was a wonderful blessing that he and June were able to donate the new Johannus Ecclesisa Series D-470 three-manual, 75 rank organ to the church. Salem Camp Ground meant so much to Tom. He and his family became tenters in 1973. He was chairman of the Building and Grounds Committee for a number of years and served as a trustee until the time of his death. He and June were also blessed to be able to donate new lights for the Tabernacle in 2019. Tom enjoyed traveling and for years he and June were able to travel to many parts of the world. One of his favorite trips was to Turkey for 18 days for the wedding of his nephew, Trent Sheppard. When he was young, he made a commitment to Jesus Christ and followed Him all the way. He loved the church and it was exemplified by the way he lived. The service will be held at Conyers First United Methodist Church at 921 N. Main Street, Conyers, Georgia 30012 on Thursday, February 18, 2021. The family will receive friends before the service beginning at 9:30 A. M. until 10:45 A. M. Funeral services will immediately follow at 11:00 A. M. with Dr. Dave Benson, Dr. John Beyers, Dr. Hugh Hendrickson and Reverend Glenn Sheppard officiating. Interment to follow at Eastview Cemetery on Eastview Road Donations may be made to Conyers First United Methodist Church, or Honduras Water Project at Conyers First or Salem Camp Ground, 3940 Salem Road, Covington, Ga. 30016. Condolences may be submitted online at www. Scot Ward Funeral Services, 699 American Legion Rd., Conyers, Ga,770-483-7216

Thomas Stone Barnett (Tom), age 89 passed away at his home in Oxford, Georgia on February 13, 2021. He was preceded in death by his parents, Darline and Howard T. Barnett; sister Hilda Bradford; and brother, James H. Barnett. He is survived... View Obituary & Service Information

The family of Tom Barnett created this Life Tributes page to make it easy to share your memories.

Thomas Stone Barnett (Tom), age 89 passed away at his home in...

Send flowers to the Barnett family.